How to be a Better Painter - Improve Your Accuracy 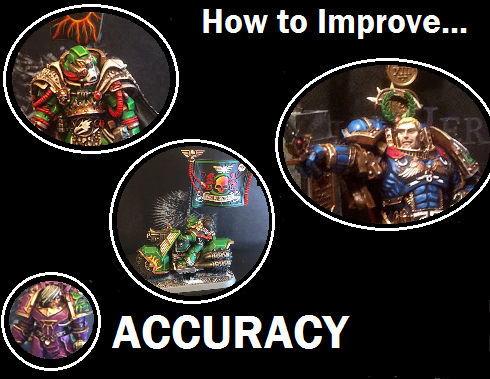 Unsteady hands and blobby paint flying all over the place? Well not for long because I'm here to hit you with some knowledge. Improve your accuracy today, right now, just by reading this article.

For most of these demonstrations I'm using a pot of Citadel's Khorne Red and a Small Layer brush. I have also used an Imperial Fist and some Abaddon Black in the first example. No expensive equipment needed.

I'm going to start with the thing I hear all the time all over the internet, but for some reason never hear the solution to; people complaining about having unsteady hands. The truth is that nobody is born with super steady hands that make them more accurate. The solution is as simple as it is complicated, although it will become second nature over time. This one comes down entirely to how you hold the miniature and how you brace yourself and your painting hand. For demonstrative purposes (as it really is the only was to explain this) I've taken some pictures of myself painting - specifically how I'm holding the model and where my fingers are. 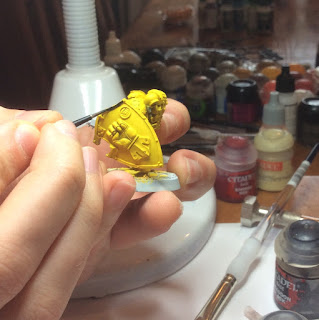 For those who are wondering - I wasn't born with 500 fingers or anything...

Ok, so you can see that I have four fingers from my left hand in contact with the model. 3 on his base and the other against his backpack. My right hand is then braced against the left, creating another 2 or 3 contact points. Add to that the fact that my forearms are braced against the edge of the desk and you'll start to understand why my hands aren't shaking anymore.

There isn't a single correct grip that you can learn and use, as it will vary with the miniature and what you're painting on the miniature. You'll have to quite literally feel it out for yourself, but it is very much worth considering and practicing. If you've been struggling to get those small details, but are holding the model between thumb and fore finger, both hands will be shaking the whole time in different directions and you're going to have a real hard time of it. You'll have to try and find what works for you, but most people will brace with their forearms resting on a table and a few fingers on the model. 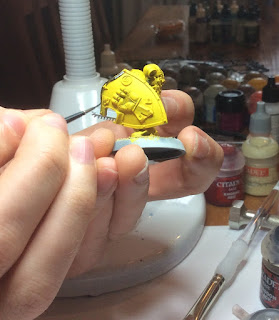 I'm also turning the model as I go to keep the angle I'm working at favourable. It is generally easier to pull a line straight down, or straight horizontally, rather than round corners - so rotate the mini as you go to make things easier for yourself.

Just as important as correctly bracing yourself is how you hold the paint brush in your hand. You should hold it like you would a pen - and close to the head of the paintbrush. I know it sounds simple, but people often forget the basics when they try something new. You can see how I hold my brush in the picture below. 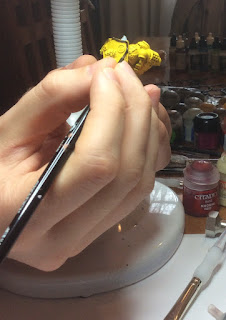 You're going to need a decent brush and realistically you can only paint details as fine as the point your brush can maintain. This doesn't necessarily mean you need a brush with a single hair - as this would actually be terrible. The brush always has to have enough bristles to be able to hold an amount of paint that you can actually use, as well as allow for smooth application. If the brush is too fine (and I mean in extreme cases, or what you might experience with an old brush that is going a bit bald) you'll find it very hard to use because the paint will begin to dry on the brush itself before application. I use a small layer brush for most for mine as there's no way I'm forking over £15 for an "artificer brush". That and to be honest they really don't look that good for the price tag.

Yep, it's not just the quality of the paint that matters. Quantity wise I'm talking specifically about how much you're putting onto the brush when you paint and where you're putting it. Too much and you'll find the bristles are pulled apart and that finely honed brush tip will disappear - leaving you with a paint shovel instead of a precision instrument. It also matters where the paint is (and I'm not just talking about the model). The paint should be focused on the tip mainly, but with enough in the well of the brush that you will be able to pull a line without running out of paint after the first millimetre.

This is one of those things that people tend to disagree over. Generally paints should be thinned from the pot to a consistency where they will apply smoothly without giving a lumpy or uneven finish. Some people say it should be like milk, but I'm not sure on the correct analogy. The important thing is that it is thin and free-flowing, but not so thin that it is washy, or doesn't stay where you're applying it. Equally if the paint is too watery the bristles will splay. You'll also hear a lot of people say that you can't paint straight out of the pot. This isn't necessarily true as most colours of paint have different consistencies, so it's different for every colour. There's also nothing wrong with using the lid of a citadel paint as a mixing area for diluting the paint - I do it all the time (just don't mix colours in there!).