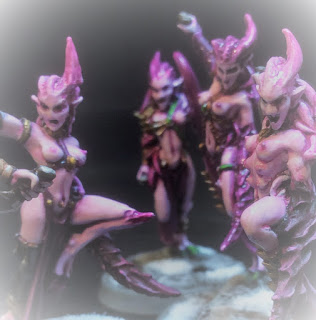 Another unit finally finished. I've been working on these for some time. I've got more units to get through too as I stocked up on 2 another 20 when they went back into production for a limited run. These are all the ones that I collected earlier, and I had gradually painted 6 of them to finished about a year ago. I finished the last 4 recently.

I really like these metal sculpts. I actually do like the plastic ones as well, but I particularly like the fine details these ones have; in particular I actually like how they scale with other models in the chaos range. They look small and delicate next to your marines, which seems fitting somehow. 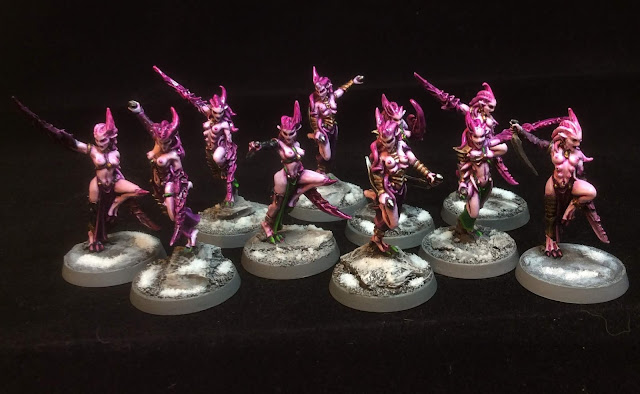 They look great as a unit too, and I know that I'll get a lot of use out of them now that they're finished. They don't cost that many points, so are the kind of unit you can afford to take in a lot of lists. Obviously, their survivability isn't that good, but I tend to play a mostly shooting oriented force with my Emperor's Children, and they're more likely to be used for counter-assault than anything else.

I'm posting again tomorrow, but It'll be something different. I finished my piece for Dreadtober, so I figure I better put that on the blog. After that, more Chaos!
Posted by Blazmo at 09:05:00
Email ThisBlogThis!Share to TwitterShare to FacebookShare to Pinterest
Labels: 40k, Chaos, Chaos Daemons, Chaos Space Marines, Emperor's Children, Slaanesh