This is a first on the blog - miniatures in 3d! and you don't even need goggles to do it. I knew we'd get there one day. Finally something futuristic.

This is sort of a test post, and more photos will be coming in later. A month or two ago, I posted about re-doing my Lizardmen, and following on from that, I've been re-vamping (pause for laughter), my Vampire Counts. I have to admit that some of the new "Soulblight Gravelords" models are rather exquisite and I was ... transfixed... by the new Blood Knights. Blood Knights actually weren't a thing in my edition, but mounted vampires were as far as individual characters go. I'll probably be using this one as a Battle Standard Bearer when the time comes, although she might be a Count for now while the force gets off of the ground again.

I will try and fine-tune the 3D image making process for better results in the future. I got a cheap spinning solar display stand on eBay and basically just put a backdrop up and quickly filmed the model, then converted to a Gif. There is room for improvement, but it's pretty cool. Hopefully it'll display properly on the blog! 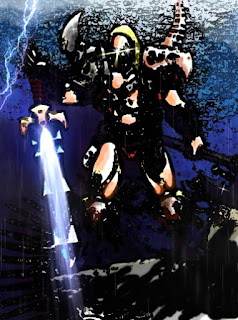 Janboe leapt from Wendy’s back; sailing through the air like a diminutive suicidal comet plunging into the sun. His drop from the colossal bovine beast’s back had been considerable, and he hit the floor with a resounding thump; finally arresting his rolling momentum by going headfirst through a display stand for alchemical components. He had just enough time to catch a glimpse of the angry horde of Butt-Goblin head-hunters that were swarming through the gap where the wall had once been before he slipped into unconsciousness.

“Eat my biscuits!” Bellowed Bungo; the throaty roar eliciting both terror and confusion from his adversaries as he jammed a fistful of crunchy confectionery down the throat of his would be attacker. He followed this unconventional attack with a swift kick that sent the unfortunate creature spiralling back down the home-baking aisle; before crashing headlong into a gang of charging Butt-Goblins.

Choking and spluttering in dazed confusion; the bruised beasts didn’t even have time to draw breath before Bungo was amongst them. The world seemed to go into slow motion as Bungo’s mighty fist collided with a goblin’s unprepared face. There was a sickening crunch as its cranium imploded and the goblin’s brain burst from the back of his head and splatted wetly on the opposite wall like a damp ball of snot. The whole scene was lent an air of both hilarity and depravity when to the horror of the onlooking goblins, the brain-ball oozed its way onto the already roaring grill of a display barbecue and burst into flames.

The finest warriors of Turdmondaz turned tail and fled in abject horror; their simian brains entirely unprepared for the heroic might of the unshackled barbarian. Unwilling to give up so easily, Bungo grabbed a straggler and drove him buttocks first into his armoured crotch-plate; splattering the poor creature into a grotesque chunky-cheese-omelette of death.

“Excelsior!” The barbarian leapt atop a potion display stand; gyrating menacingly at the remaining miscreants as they scampered out the door of the Adventure Mart. They looked back in terror, only to see Bungo as he pointed towards the barbecue again and rubbed his herculean six-pack hungrily. It wasn’t until he started to motion the next phase of their potential trip through his small intestine that several more goblins died of sheer terror.

Suddenly, all went quiet. Even the Butt-Goblin that had been dying a slow death choking on biscuity crumbs was suddenly dumbstruck in mute awe as a colossal dark shadow fell across the otherwise well-lit adventure mart.

“The … the champion of…of … Turdmondaz” The creature rasped the words with its last ragged breath, dying with a smile on its twisted lips.

“I challenge you” the voice that issued forth from the shadow was strong, yet clear and held with it the power of wisdom and certain victory. Bungo looked up towards the door which swung inwards perfectly on cue; revealing the colossally armoured form of his new adversary silhouetted against the light of the setting sun.