I haven't been working on my gang a lot lately, but I found a few photos of them that I hadn't posted. I made it to 7 finished gangers, so it really wouldn't take much to see them completely finished and ready to be fielded in all their painted glory.

Looking at them now really makes me want to work on them though - I think it's the old 90s Warhammer throwbacks like the red guns, hazard stripes and migraine bright hues! Did you spot the 2 original metal gangers in there? 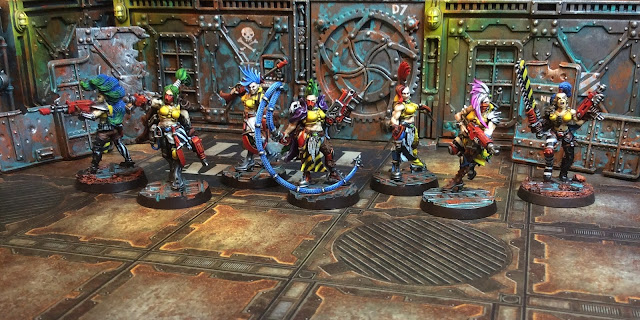 I also did a piece of fiction to start the campaign:


He was now known as Bilge Master 4. It hadn’t always been that way, but an unfortunate encounter with a stray las blast had destroyed half of his cranium; melting away most of his sense with it. At that time several years in the past, he was called Korruk of Clan Goliath. His stricken body had been dragged to a doctor who had done their best to rebuild him with the only parts available. Unfortunately for poor Korruk, these parts had been hastily scavenged from the computer core of a sewage skiff and the programming was never fully wiped; leaving him with an identity crisis of sorts.

“Cleanse and sterilize!” As usual, the battle cant made little sense as the steely words left Korruk’s lips in a toneless boom.  He let fly with his stub-cannon into the darkness; lighting up the under-deck for a moment in the brilliant light of the muzzle flare. Somewhere in the distance there was a momentary sound of panic that soon grew still again.

Korruk had been patrolling the lower decks of the Brawndo production plant for several months after the Bennett Brothers had relegated him to a distant support duty. In truth, his delusions and obvious brain damage had made him a liability to the rest of his crew. For his part, it seemed that the newly self-coronated Bilge Master 4 was a lot happier wandering the tunnels aimlessly in a hallucinatory stupor.

Another noise issued forth from the darkness; it was closer this time. Bilge Master 4 cocked his weapon in readiness; just in time to see a huge rat bristle forth into the flickering halo of a wall mounted illuminator. The hideous beast skittered a few steps forward on misshapen legs. Its pudgy bulk reared up; sniffing the air as it moved. It seemed to realise that it was not alone, but it didn’t have enough time to put that knowledge into action; Korruk had already pulled the trigger. The dull, hollow bang of the weapon echoed through the maze-like structure as the rat’s body burst open in a wet puff of filthy viscera.

“Cleanse and sterilize.” Korruk repeated the words emotionlessly as he took a lumbering step towards the fresh kill. “Initiate docking protocol.” He reloaded the gun; a string of drool hanging from his mutilated lip.

“The plan is simple; that goon thinks he’s some kind of sewage processing plant. So all we have to do is flush.” The end of the sentence was punctuated by a wet popping noise as Tabby’s bubble gum burst. The Tabby Cats were in their den; the gang had managed to get some meagre digs in Bunk Town, but the room was packed to bursting as the Escher crew squeezed around a sector map that seemed to have been etched in crayon and splashes of hair dye.

“Care to explain that one boss?” The Juve received a quick slap to the back of her head for her audacity from one of the older gangers.

“We run around town flushing everything in sight right down on his head. He gets confused, and we slip by into Clan territory unnoticed … hurr hurr hurr.” Despite her slight stature, Tabby’s laugh was deep and goonish like a drunken Ogryn in heat. She had quite the complex about it too, and she shot a warning glare at the few who dared smirk at the simian sound she was making.

The dawn of battle would be trumpeted a few hours later by the sound of several dozen toilets ringing in unison.

It's back to the 90s today with the first bit of test painting from my diorama (As discussed a few months ago Here). I scrubbed off the old paint and to be honest I was surprised how good the model looked under all of that gumph.

For a project this nostalgic, not just any colours would do. He had to be really really bright and eye catching (so basically as saturated as possible). I also wanted to sort of update and recreate their original scheme which was basically goblin green skin and red frills. With that basic idea in mind, I busted out the airbrush and went to town.


I started off with a coat of Vallejo Emerald, which is a nice saturated colour that went on well over the black undercoat. After that came a highlight with Vallejo Foul Green, which I added white to and highlighted again. I did a pre-shade with white before blending the white in with Vallejo Fluorescent Yellow. The result was an almost migraine inducing green hue that can be seen several feet away even though the model is about 1cm tall! Pretty much exactly what I was aiming for. As I'm planning to put him in a diorama, the base is just temporary, and will be removed at some later date.

As this is an oldhammer project, I want to keep this bright with the other models. I'm going to use this scheme for the basic skinks, although I'm also planning some different skink schemes as well; particularly for the ones with different frills. It also feels a bit counter-culture; painting old models in really bright colours (when fashion is for Blanchitsu and grimdark) so I want to play with that and really push it to the max, so when the diorama is finished it'll be like a riot of fun and colour. Well, that's the plan anyway...
Posted by Blazmo at 09:05:00 4 comments:
Email ThisBlogThis!Share to TwitterShare to FacebookShare to Pinterest
Labels: Diorama, Games Workshop, Lizardmen, Project
Newer Posts Older Posts Home
Subscribe to: Posts (Atom)