*Insert maniacal laughter* It's alive! .... and all that kind of stuff.

I've just finished my first painted miniature. As this is a new scheme, I wanted to test out the colours to see how they would go on one model before committing to the rest for the force. I was torn between a lot of different colours for them; for a while I thought red would be good, but Stormvermin are always red. I was thinking of going with white after that, but then again, I did white for last year's Squaduary. I wanted something cool and different, and being me, I also wanted to work some orange into the scheme. 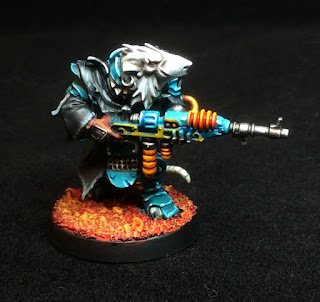 I liked the idea of painting a kind of turquoise type colour as it is pretty rare. I also wanted something that would look more sci-fi than fantasy and that would be a bit unique. With these things in mind, I invented this scheme. The blue/teal armour is done with the airbrush, which I just used to get the colour and the basic blend down. After that, I worked with the brush to get the rest done.

The pictures aren't the best, but I was in a bit of a rush. Hopefully they're good enough for you to get the general idea.

It wasn't all plain sailing, and I had to change some of my ideas as I went to get the result that I wanted. I had originally thought of giving them brown fur, but it just didn't pop. I changed it to white, but then I had to change the colour of the cloth parts so he didn't end up as a  big beige blob (the robes were originally white). Quite the conundrum. After that, once I was happy with how things were going I still had to think about the base. Personally, I think a lot of people underestimate what a good base can do for a model. Not just in terms of tying it into the universe, but just as a good source of colour and interest. It is a lesson learned the hard way as I painted my share of plane old Goblin Green bases in the 90s and early 2000s!
For my 40k Skaven, I chose a red dust style base. It plays nicely against the orange spot colour and contrasts well with the armour and white fur details. It also serves as a reminder that on the field they're mechanicus through and through; well as far as rules go rules anyway! 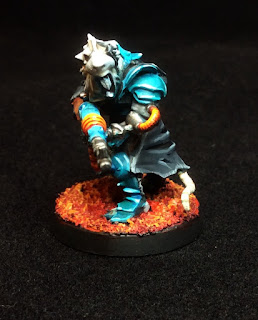 Overall, I'm happy with the scheme and I plan to keep on plugging through the rest, so that I can get this force off the ground! Squaduary has been a good motivator too, and getting some of these Skaven done is putting a dent in my hobby backlog/cupboard of shame. Stay tuned for more snarly Ratmen coming this way soon, and don't forget to follow the blog if you want to keep up with my progress.
Cheers
Posted by Blazmo at 09:00:00
Email ThisBlogThis!Share to TwitterShare to FacebookShare to Pinterest
Labels: 40k, 40k Skaven, Adeptus Mechanicus, infantry, painting, Squaduary