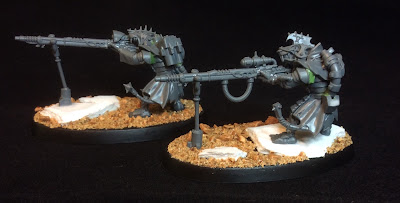 Given a few modifications, theses conversions would also be suitable for Age of Sigmar for use as Jezzails. For my purposes, I'm using them as Transuranic Arquebuses for my 40k Skaven/Mechanicus.
I really had 2 options available when I made these. One was to get hold of actual Transuranic Arquebus parts to build them. Unfortunately, they're a bit expensive and hard to get hold of. Being cheap, I wanted another option.

Handily, my brother has a large Skitarii force with plenty of spares. He gave me a pair of Radium Jezzails and I combined them with some ordinary ranger arms to make these guys. The little front stands were created using some spare bits from the Onager and an old smoke launcher. Other than that, the rest of the squad was made exactly the same as the first one that I built. 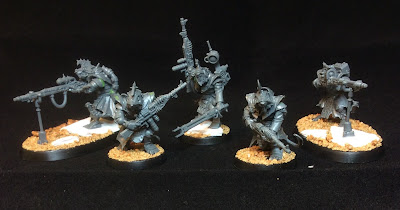 I decided to stick with the Carbines for all of my ordinary men. I had thought of building this unit as Rangers rather than Vanguard, but the parts just didn't look right to me. They just looked like Skaven with muskets when I sized the parts up, which wasn't really what I was going for as they needed to look a bit more indeterminately futuristic. 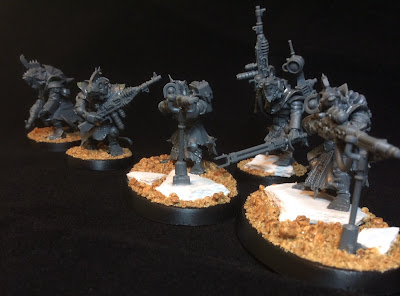 Anyway, I've finished the squad off and they're now ready for paint. They didn't take that long as I've got the conversion process down now. If I can finish painting these guys then I'll have 2 units of troops ready for battle, which always feels like a benchmark in an army.

If you missed the rest of the force, then be sure to check out my other posts: