I'm on a roll with this new project; and to prove it here's a rather grizzly beastie fresh from the forge. 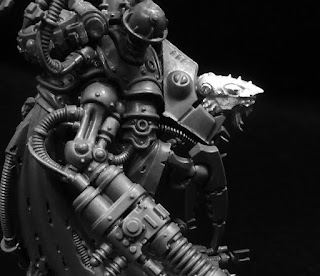 He is a bit of a mash-up of parts. Kind of what I envisage for a Warlock Engineer given 40,000 years or so to really get his madness down. I've used the Tech Priest Dominus as a base, which has to be the best decision I ever made as it is such a nice model. From there, I've added a plethora of plastic detritus to bring about some wonderful changes. A lot of the conversions are actually quite subtle, but if you're familiar with the kit you can probably tell that there are a lot of small changes all over the place. 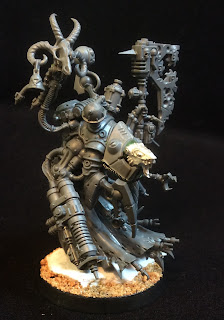 His axe is actually one from the Nurgle kit (a Plague Reaper or something?) I had it left over from my obliterator that I built a few months back. I'm particularly happy with the Horned Rat servo skull, as it is quite thematic. His head is from Ikit Claw, and that's probably exactly what I'll call him! 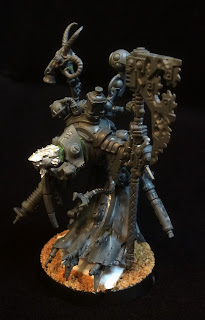 He is also sporting a few Tau and Necron Parts for good measure. I want to keep them as "What You See is What You Get" as possible, so he still has all of the same guns. 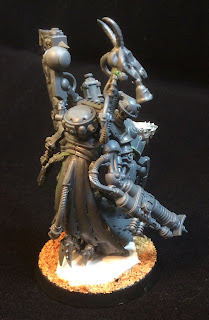 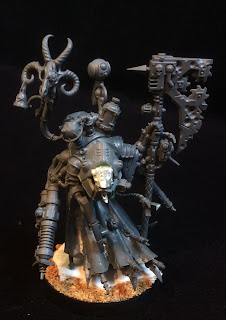 Now I just have to paint him...

If you missed yesterday's troops, check out the rest of the 40k Skaven here:

I also finished the Alpha for the squad, so they're pretty much ready for paint once all the green stuff dries. Don't forget to follow the blog, or check back later to see how I get on.
Posted by Blazmo at 09:10:00
Email ThisBlogThis!Share to TwitterShare to FacebookShare to Pinterest
Labels: 40k, 40k Skaven, Characters, Squaduary