I recently painted Roboute Guilliman - Primarch of the Ultramarines as a commission. I have a few work in progress pictures as well as some of the finished model and in this post I'm going to do a step by step walkthrough of how I painted each colour and also detail some of the techniques used. 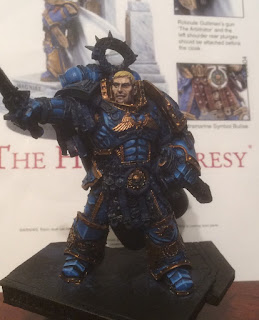 In this first picture you can see the finished blue colour of his armour as well as a basecoat on the gold details. I also painted his face. Needless to say the first step was an undercoat with Chaos Black Spray before the painting could begin.

I'll start with the easy stuff - The armour was basecoated in Macragge blue. I then applied a generous wash of Kantor blue and left it to dry - this gave me some basic definition on the shapes. For these first 2 steps I recommend using a very large brush - no need to worry too much about accuracy as long as the paint is still applied thinly. I then began highlighting the edges of the armour with a small layer brush using a mix of Macragge Blue and an old Ultramarines Blue (Altdorf Guard Blue these days). I then applied a finer highlight of pure Ultramarines Blue and finally a very fine edge highlight of Ultramaries blue mixed with White Scar. With those steps the Blue armour was complete.

After the blue was complete I began the painstaking process of picking out all of the Gold detail with Brass Scorpion. This brings me to my number 1 tip for painting gold - never actually paint gold, use brass scorpion and then highlight up! Anyway, I applied a coat of brass scorpion and then when it had dried I washed all of the gold areas with Rhinox Hide to define the detail and provide a nice tonal variation when it was finished. In this stage I was careful not to get the brown wash on my finished blue armour.

For the face I used a mix of Rakarth Flesh and Bestial Brown, washed with Rhinox hide and then highlighted successively with a mix of Rakarth Flesh, Bestial Brown and white. Unfortunately I didn't do step by step pictures, but if I had it would've looked like a mess for most of the process. The most important thing with faces is to keep going till you're happy with the result and to keep the paint thin. As long as the paint is thin you can always adjust the tones and keep going without losing detail!

On the subject of faces, here are some hints you can apply to most models: 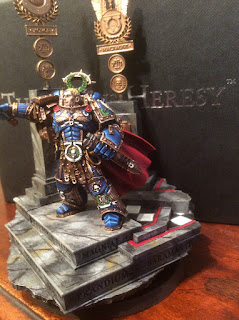 So I've jumped forward a bit again, but don't despair, most of it is relatively simple and I'll tell you what I did with the stone effect in a minute!

The next step after the armour and the face was to finish off those gold areas I was working on. To do this I highlighted most of the area of the gold with a mix of 50/50 Runefang Steel (Mythril Silver) and Brass Scorpion. I added more Mythril silver to the mix and did a second layer of highlight, but covering a smaller area. Once it was looking good and gold I applied an edge highlight of pure Mythril silver to get a nice shine and really bring out the details.

The white details were basecoated in Rakarth and then washed with Nuln Oil (black wash). This gave me a good base to work over. I then Highlighted about 90% of the surface area with Ulthuan grey before adding a final fine highlight of White Scar.

The laurels and other green details were basecoated in Caliban Green before being highlighted with Warboss Green and finally Moot Green. I then applied a shade with Biel-Tian green, before re-highlighting the edges with moot green.

The leather details were basecoated in Rhinox hide and then highlighted with Bestial Brown. I then applied a fine highlight of Bestial Brown mixed with Bleached Bone, before washing down again with Rhinox Hide.

With the Primarch himself  taken care of it was time to focus on the display base. I wanted to change the colour from the blue-white one on Forgeworld as I think the light colour draws the eye away from the model itself and my personal painting style is a bit more grizzly looking anyway. That and I wanted to get away from how Roman he looked (hence the stubble)!

With these thoughts in mind I tackled the base. For simplicity I'm going to bullet-point the steps below to show how I painted the stone surface:


After all of that excitement I finished the gold details on the base the same as earlier and finished off the remaining details. All in all Guilliman probably too between 10 and 15 hours from start to finish.

If anyone has any questions or wants to attempt the same scheme leave a comment below! 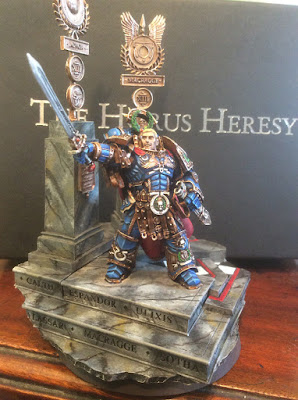 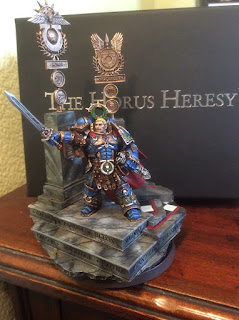