fresh from my painting table, I'm bringing you the first WIP images of Greyfax in gloriously gold NMM (non metallic metal). This is still a fairly new technique to me, but I consulted with the divine angels themselves for a slice of godly wisdom (also known as reading Angel Giraldez's Painting Miniatures from A-Z Masterclass Part 2, and trawling the Internet for inspiration).

I started with a few layers of airbrushed Browns, yellows and finally white, before switching to the ordinary brush and using a series of glazes and highlights to try and push the contrast as much as possible. I'm not finished yet, and I've been using her left leg as a sort of proving ground for the technique, but I thought I'd bring you all the initial results of my hard labour.

Once I've finished the gold to a standard I'm happy with, I'll discuss the technique in more detail. For the minute though I'm just really enjoying building up the effect slowly. I think the telling thing was when someone saw it in progress and said "nice gold" not nice yellow, so I think it's working. I'm still trying to push the contrast further though, and will be darkening the Browns to amplify the effect as I go.

I've also started planning out the other colours with black for the corset type armour (which should make her waist look smaller and therefore extenuate the femininity of the armour) and a dark regal blue for the cloak. I'm still not sure what to so with the inside of the cloak (red maybe?). The smaller pipes/details will be silver, but again it will be NMM, so that'll be another stretch. Well, I guess I can only blame myself.

What you're looking at is probably the fruits of about 4-5 hours work. 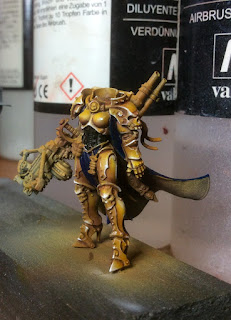 Check back later for the next instalment, where I'll hopefully be talking about how to paint NMM gold with a finished example of the technique!

On a side note, am I the only one thinking Gray Fox every time I see Greyfax.

"Only a fool trusts his life to a weapon!"