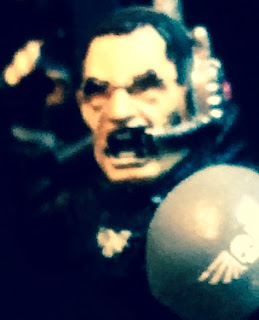 After a lot of dry painting articles and showcase style stuff, I decided to do something I've wanted to do for a while. I'm starting a new series on the blog today called "Gaming Memories" where I'll be taking memorable characters and events from my gaming history and writing up a little bit about the character and why they mean so much to me.

First up is what may be my favourite mini in my whole collection. I know you're all wondering why looking at this badly painted Cadian Sergeant, but I had some of the best games of my life playing with this guy. 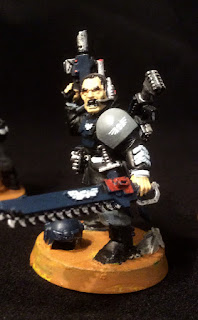 He was originally part of a game co-created with my brother in our teens known by the somewhat obviously film inspired title "Mad Max". It was a post apocalyptic battle game that combined old Warhammer Mechanics with as many classic mental 40k minis as we could muster. Characters gained experience as they battled in what was basically a 10-20 man strong arena of death where ammo was scarce and after a few turns nobody could afford to pay for another bullet (every shot was costed and paid for out of the spoils of every fight) so it normally ended with a few characters locked in combat vying for the grand prize.

After plenty of matches in that style, we introduced new game modes; pitting our characters in teams against various foes with free ammo. Classic scenarios included Zombie Attack (which we played from dawn till dusk on more than one occasion), Vehicle Race, Breakthrough, and VS. Del'Ragio. Del'Ragio as the Colonel and sole commander of a well drilled unit of men known only as Del'Ragio's Desert Dogs; who battled our characters in a bid for supremacy. He even had his own elite Del'Ragian Guard. He almost always lost due mostly to his men's over enthusiastic assault rifle fire (that led to way too many jams) and the fact that our characters by this point had far better stats, weapons and equipment, although he did have numbers on his side. 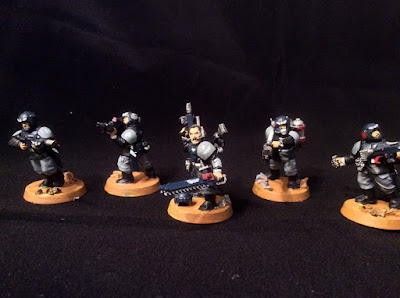 Over time Del'Ragio built up a persona and character of his own; his trademark massive eyebrows eventually leading to the first name "Eugene" being added in homage to actor Eugene Levy (also known as "Jim's Dad, from American Pie"). He was just about the only one of his men who ever seemed to be able to fight, and was seemingly hard-bitten and hilarious in equal measure.

The game system also leant itself to some very hilarious and inspiring moments as well as epic failures; with mechanics written in for shooting grenades out of the air, defusing dynamite and even flying aeroplanes in the later editions. Del'Ragio did all these things and more as we played the game for several years on-and-off, long after our old Warhammer Fantasy had been relegated to a drawer in the bedroom (or several). 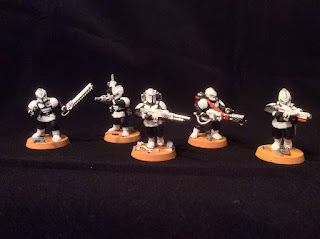 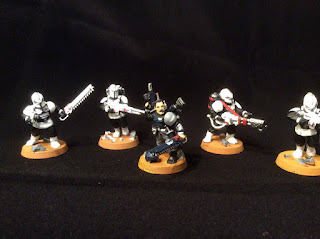 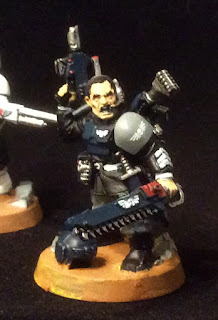 His character grew over the years; becoming ever more daring and outrageous. He led his men from the front into withering shell-fire, hordes of zombies and haywire robots; always stern with his face set in a rigour like constipated grimace. It almost always led to complete annihilation, but his character was set in stone. These days I can only salute him as a symbol of overblown masculinity.

He even inspired my bother some years later to pen a piece of fiction that really captures what he is all about. As it stands, at some point, I'd love to have a go at making and painting a new miniature for him, but it'll have to wait till inspiration hits.

Eugene DelRagio was a pretty average guy; average height, average weight, average hairstyle and average sexual appetite. But there was one thing that DelRagio wasn’t average at, killing alien butt-holes! In fact some might say that it was his area of expertise.


“Die you alien butt-hole!” yelled DelRagio enthusiastically as he smashed his vibro-machete through the torso of the monstrosity bearing down on him. The creature screamed and twitched spasmodically, flicking its scythe bladed upper limbs towards him. DelRagio’s return stroke severed both limbs to bloody stumps in an instant and the thing fell away, bleeding green gunge into the brown dirt. “That’s what you get!” hollered DelRagio, whirling his vibro-machete and depositing a good measure of the vivid green goop onto the cowering heads of his remaining squad members nearby. Suddenly, a hail of weird alien projectiles smashed in to the debris the squad were using as cover. One of DelRagio’s men was reduced to a chunky red smear in the blink of an eye. The squad returned fire as best they could, blind-firing wildly over their makeshift barricade. Most of the shots went wide or ricocheted from the armoured carapaces of the alien beasts. Eugene DelRagio turned on the spot, unlimbering his weapon. Quickly he struck a pose and loosed a barrage of hyper-velocity rounds from his fully-automatic belt-fed rail-cannon. The insane power of the massive weapon stitched enormous entry wounds across the torsos of the alien warriors; the exit wounds were even more enormous but nobody was in a position to appreciate them.


“Yeah! Taste it!” bellowed DelRagio, pumping his fist heartily as his rail-cannon cycled ready for another salvo. Just as the ridiculously heavy metal blaring from his helmet radio reached an ear shredding crescendo it was interrupted by a message from the squad command net “DelRagio, you’ve gone too far, fall back to position sierra, where we can provide you adequate support!”


“Over-extend this!!” DelRagio shouted, grabbing another handful of man-business and gyrating obscenely. Bored of mocking his commanding officers over the radio, DelRagio manually switched back to the absurd metal track pounding from his favourite playlist.


“Kill ‘em all! Nyyeeaaahhh!!” The singer screamed accompanied by some bizarre shredding from the lead guitar. DelRagio briefly considered this, before deciding that it was a much better plan than the suggestions offered by the command net.


“Right men!” DelRagio shouted as he leapt to stand atop the barricade behind which his three remaining squad members were still cowering. “Let’s go kill some more of these alien dick-wads!” The men looked up at him, gesturing vaguely but incessantly with the vibro-machete in his left hand; their expressions of fear and confusion turning to ones of resigned incredulity. Unfortunately, DelRagio was too busy looking to the West where something had just exploded in a most distracting manner. “With me, charge!!” DelRagio yelled, jumping down from the ruined barricade and setting off toward the source of the explosion at a run “I’ll show you how a real man blows shit up!” Fortunately he was spared the muttered insults of his squad by the drum solo battering his eardrums. The long suffering men of the 183rd Colonial grenadiers watched their commanding officer dwindling into the dust kicked up by the battle. Lethargically they hefted the huge belts of rail-cannon ammunition needed by the gluttonous weapon carried by their commander and followed him at a slow trudge.