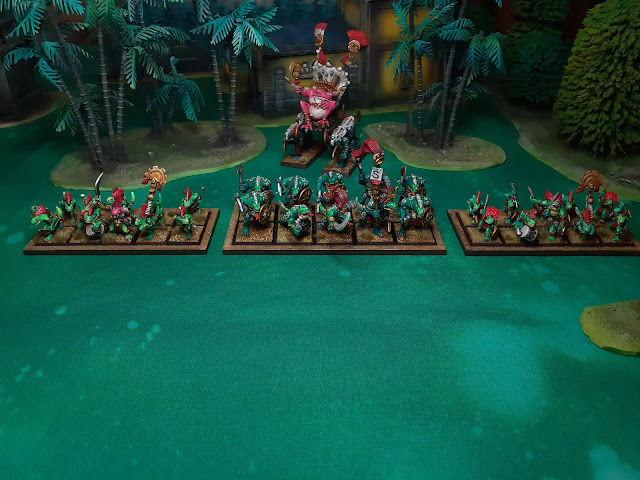 So, I haven't posted in some time - at least 6 months I think. I have been doing some hobby stuff though, but taking proper photos and making posts for the blog takes some time to do. Anyway, a while back I posted about maybe doing a diorama with some of my old Lizardmen. The project took a different turn, and I've started remaking the army as an actual force. I started messing around with some fantasy again, and one thing sort of led to another.

These are all models that I have owned since the mid-late 90s when they were released. I was quite young at the time, and as a kid, I made a bit of a horrible mess of building and painting them. It's surprising how good they look when you take off all the old paint!The scenery they're photographed on has been another lockdown project. I discovered the magic of hot-glue guns for scenery and it was pretty quick to put together in the end. 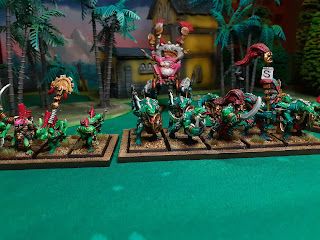 In terms of their actual colours, they use a revamped version of my original scheme. At the time, they were painted with a liberal coat of the notorious oldhammer classic paint "goblin green" and given a hearty dollop of blood red for their claws, frills and, well... pretty much everything else. I took the same colour ideas, but did a new version with the actual details picked out and everything! My childhood self would be thrilled (but confused why my 500 point list wasn't a maxed out character's allowance with wither the hydra sword or frost blade equipped!)

As a special bonus in the photo above, if you look in the background, you'll see mountains and sky - an oil painting used as a backdrop which was another one of my lock-down projects. Bob Ross style (but a bit shite as I'm not an oil painter really!) 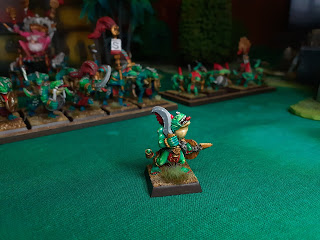 A bit of a zoom in on the skink champion for the javelin unit. I'm sticking with modern techniques for painting, so you can see little points of light on there. I've made them really vibrant. The movement trays are from Warbases - and are incredibly cheap and work great, so I really recommend anyone doing old-style units picks some up.

The Slann is pink - he was originally green, but I wanted to match the accent colour for the army with him and make him stand out.

I actually like this range of models a lot more than any of the later kits that came out - I've got the next 500 points planned out, but over half of it is a Stegadon, so that should make for an interesting project. I've also started painting my Skink cold one riders - which were originally a dogs of war unit when they were released and I bought the box set. Just for the record, Saurus should never ever ride anything as it's against the established lore - I used to love the background of the great crested Skinks as a kid - the only ones strong enough to tame cold ones (and with strength 4 on the profile and toughness 2 they were certainly interesting!). Saurus were too stupid to actually ride or tame anything - and were basically super-violent warrior crocodile men who were barely able to utter more than a few words. When they released those horrible Saurus riding cold ones models in the next edition it was tragic. Not only did they change the fun and characterful lore, but the models stank - with hunch-backed cold ones and the riding pose that looked like they were mating frogs... 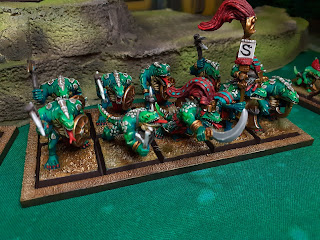 The Saurus command group were my first ever Warhammer models. I actually have the top of the blister pack stashed away somewhere for safekeeping! This was back when the champion was £3!
Hopefully, I'll post again fairly soon. I also painted up a 500 point force of Bretonnians - with 10 archers, a small lance formation with mounted general and a level 1 sorceress. I may take some photos and post them later on.
Comment below if you like old crap, want to see some Bretonnia ride again, or if you are insane and in your deluded state want to defend the hideous saurus cavalry.