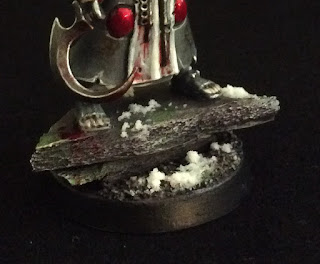 Recently, in an effort to give some bases a little more interest, I bought a pot of Games Workshop's Valhallan Blizzard. This stuff is specially formulated to give a snow effect to the top of your bases. I was interested to see what could be achieved, as it's a relatively easy step that has the potential to add a lot of impact to an otherwise bland base. I'm using my recently completed Wrack as an example miniature for this review.

With the intro out of the way, lets take a closer look at the product. 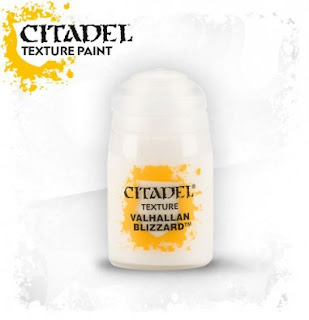 This stuff is really thick. I know they say that the new texture paints can be applied with a brush, but in this case only quite a stiff bristled one. That said, there's a bit of leeway in the drying time, so you get plenty of time to adjust it on the model and it spreads ok. It doesn't take long to apply and overall has a satisfying effect for the amount of time it takes.

After a bit of experimentation, I found that digging a bit out of the pot on a sculpting tool worked well, and that once I'd separated it out from the whole it was easier to manipulate with a brush.

Like I mentioned above, it does take a few minutes to cure, and even then I think it takes longer to fully harden. This helps a bit actually as it gives you some extra time to adjust it and as the effect is a finishing touch for bases, there's no problems with letting them sit on the side while the snow cures.

I found that the snow could sometimes come off on my finger when handling the base (I specifically handled the snow directly to test it). The majority of it stayed on there and I think it would be pretty hard to shift, but one or 2 tiny grains came off the top of some of the "heaps" when handling and I could see it wearing a bit in the long-term. To combat this I gave it a quick coat with some PVA to seal it; which didn't seem to do any harm to the aesthetic qualities, so I'd probably recommend it, especially for models that will see a lot of play.

Lumpy, snowy, check out the pictures for more. In person, I was happy with the effect and it combines well with a painted base to add a nice finishing touch. I added an extra layer of gloss varnish to mine in the end (not too thickly) to add a bit of wet shine to it. I don't think it's necessary though, and its really a matter of preference and what you're going for.

What I particularly liked was that it naturally makes small clumps that look very realistic when you apply it to a base; like little remnants of melting snow. It's a nice effect that gives a strong finish.

At the time of writing, it's being marketed at £4.55 a pot (24ml). I think that whether you consider that a good deal or not probably depends on your approach. For me, I wanted to add a dash of snow to a few bases; meaning  it would go a long way. If you were looking to completely cover your bases, or to do scenery, you might want to look at other options as I could see you might end up getting through a lot of pots!


A good product, but one that needs a bit of thought and TLC to reach its full potential. Great fun though and well worth a shot if you're looking to spice up some bland bases. If I was rating it out of 10, I'd probably say 7/10. It looks good, but could be a bit more durable, although this can be treated and it isn't likely to come off easily. I also think that it could be a bit pricey for some uses; particularly scenery or application to larger bases and models. Well worth a punt though for anyone interested.