My series continues this week with another classic memory. This time I have my brother's Dwarf Organ Gun from about 20 years ago. 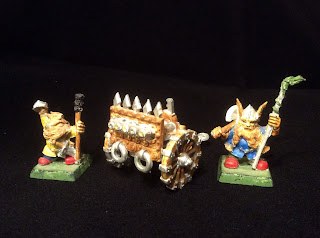 You might ask why a hideously painted cannon should evoke such nostalgia (The picture is overexposed on purpose to hide the horror a bit....). Well, it was the first Warhammer miniature either of us ever owned and for me it was the first I really saw up close. It also saw the battlefield in every game we played for years and I dread to think what its total kill count would be (probably a few thousand- it was incredibly powerful).

The other reason I think so fondly of it is because to me this Organ Gun represents the competitive spirit and rule abuse comes so naturally to children. The rules back then were really sketchy, with wide avenues that left them open to abuse; especially in the Dwarf book which was already a bit old when we started. In particular the rules for the Organ Gun were so unclear that using the thing was a real battle of wits, and as children I think we just interpreted it as the most powerful possible version.

Its rules issues were massively compounded by the fact that Dwarf Runes are the most broken system I've ever seen in any game. With the right combination of runes (and rules interpretation as it wasn't clear anyway), the organ gun was completely invisible and unable to be attacked in any way. When it fired, it became visible, but the problem was that it was possible to take the rune multiple times - leading my brother to believe that he could fire the gun for several turns running without it being able to be attacked as another rune would simply come into effect - and really there was nothing in the rules that stopped you!

It didn't help that when it fired, the thing had the power of 4 regular cannons, and no clear allowance was made for having to roll the misfire dice multiple times for every shot separately; meaning we rolled once for all 4 shots. It wouldn't have made any difference though anyway, as it had runes that stopped it from suffering any ill-consequences from a misfire, so it was basically unstoppable.

I think nobody would be surprised that his Dwarfs never lost a single game in their whole career. It does make me laugh though; ah, to be young again with an invulnerable weapon of war. Those were the days.

You might be tempted to think that this competitiveness was all his fault, but I had my fare share of Frost Blade wielding, Forbidden-Rod toting, Amber Amulet wearing flunkies that beg to differ! (the Frost Blade was instant death no armour saves, the Amber Amulet regenerated 1 wound a phase - so about 5 a turn, and the Forbidden rod allowed you to use one Total Power spell a turn).

Although his Dwarfs remained undefeated, it was largely due to the fact that most of our games were multi-player and they were so slow that they never made it across the field; that and nobody would approach the cannons willingly. I on the other hand was putting my most benderish of combinations to good use, but I suppose that's news for another episode of "Gaming Memories".
Posted by Blazmo at 09:00:00
Email ThisBlogThis!Share to TwitterShare to FacebookShare to Pinterest
Labels: Age of Sigmar, Fantasy, Gaming Memories