Things have gone far better than I expected and I've forged ahead. Behold the light of progress!

If you missed my earlier post, these beasties are to be used on the field as Adeptus Mechanicus, so you might recognise some familiar weapons. I was worried that the conversions would take way too long, but handily it turns out that the Skitarii arms are almost compatible with the Stormvermin kit (read compatible very loosely). They did have to be cut about a bit and filled extensively (especially in the back), but it wasn't too onerous and I'm really happy with how the squad is coming together. I have finished these guys, but I'm waiting on an infusion of fresh parts to build the Alpha from. 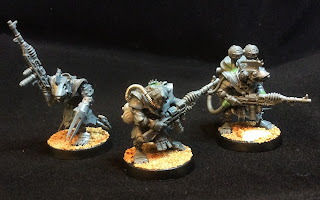 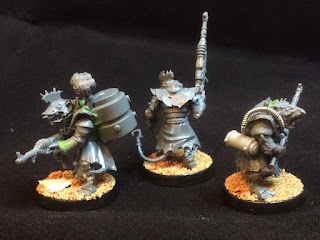 I've also added all manner of techno bits to them to help sci-fi up the look. Luckily the Stormvermin armour is already most of the way there, so the occasional dial or switch easily knocks them right out of fantasy and into the grim darkness. 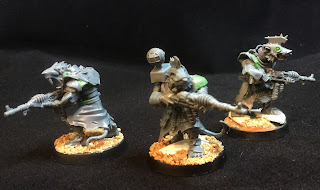 In line with my pledge, I've also been working on a character - a mighty Rat-Dominus. He is still under the knife so to say, so tune back in a day or two to see how he fares!