I've been making some good progress on the Escher gang this week, and today I'm presenting the first finished miniatures. I actually meant to post this article when I finished the first one, but as I was a day or two late, I finished a second one! At this rate the gang will be ready to fight in no time! 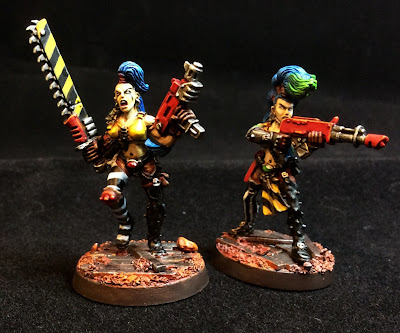 For the colour scheme, I really wanted to evoke the classic look that Necromunda always had; with bright colours and patterns. I'd always fancied having a go at paining an army "2nd edition" style, so the gang was a great chance to take a trip down memory lane without having to commit to it as permanently as painting a whole army would've been (I think  have enough armies at this point too...).

It seems that the classic colours for Escher gangers tended to be yellow, so I wanted to work that in there. I've also gone with bright blue and some reds (especially on the weapons) to get that old skool primary colour mash-up going on. I've done a few areas with hazard striping too as it is classic, and not that hard really. I got a lot of practice in on the technique while I was painting my genestealer cult. 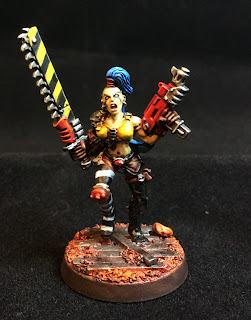 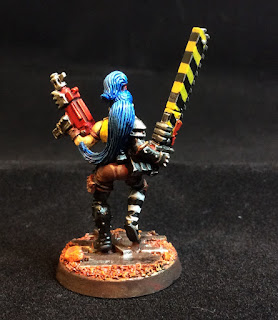 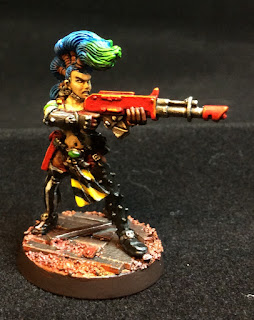 The old miniatures stand up pretty well considering that they're about 20 years old! I think the original game had great styling for the time, and the proportions are pretty decent. When I think back on the old mono-pose plastics that I used to collect compared to these, I really have to ask myself why I didn't buy more Necromunda at the time.


The pictures could be a bit better, but I really wanted to get these up on the blog before I painted any more of them. Hopefully they'll be facing off with Ed's Goliaths soon!
Posted by Blazmo at 12:00:00 9 comments:
Email ThisBlogThis!Share to TwitterShare to FacebookShare to Pinterest
Labels: Escher, Finished Work, Games Workshop, Necromunda, Oldhammer 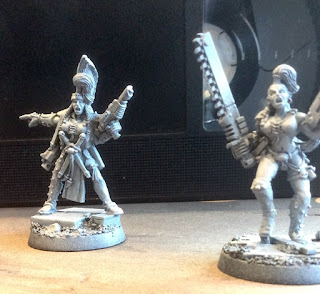 I'd like to say that I've had these sitting around for the last 20 years waiting for the new edition of Necromunda. Unfortunately, that dubious honour goes to some guy that I bought them off of on eBay. I was fortunate enough to get a decent deal though, as with the announcement of the new version of what most people had assumed was a long dead game the prices have skyrocketed.


I was involved in the hobby in the 90s when Necromunda was a thing, but as a penniless kidd, I couldn't afford to play more than one game, which at the time was Warhammer Fantasy. Still, I've always had fond memories of Necromunda, so I was excited to hear about the new version of the game. I do have a few Necromunda figures in my collection, but no actual gangs as they were mostly bitts I bought from the old mail order system because I liked them - like the old Ash Wastes gang sniper. Good times.

Anyway, I got to talking to my brother (Ed from the BERSERKERBLADE blog) and we talked about splitting the new box game for Christmas; which should be cool. To add an extra level of fun, we thought we would try and get a head start by scrounging together a few old models, or building a few new ones, so that hopefully we'll have a small force ready to deploy on the day.


I know that Ed will be converting some Goliaths using some chunky Bloodbound warriors (I've given him some cool bits to work with, so I'll be excited to see what he comes up with). Unfortunately, finding modern analogues for Escher gangers was a lot harder, and after a bit of searching I decided to stick with the originals. 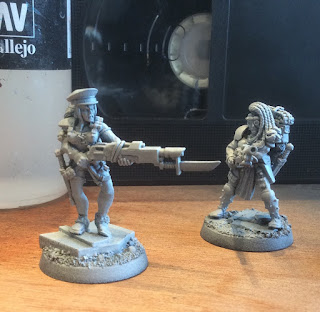 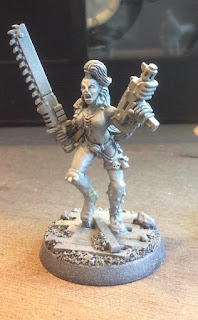 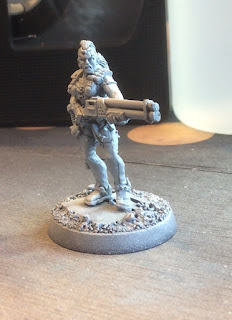 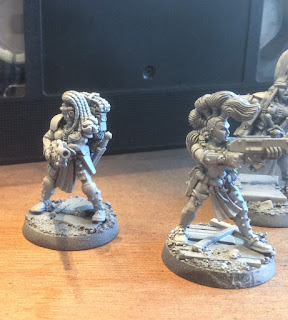 Today, I'm presenting the first wave of posts about this project. I've got the miniatures together and ready for paint. In the end, I had to do a few conversions in order to repair some damage; such as the chainsword that I added in place of a missing sword blade or the shotgun ganger that I had 2 of, so I've swapped it for a lasgun and modified the head.. It still seems strange that in the original game they used to encourage conversion as your characters developed. With fully metal models and separate sprues of guns, you have to wonder what kind of maniac would even attempt it!


Paint-wise, I'm looking to combine some modern and traditional techniques; with plenty of hazard stripes, cheques, black flames and patterns. We'll see how that goes, but if I can, I'll try to put some tutorials together to help people with their own projects. If I'm feeling brave, I might even try my hand at some tattoos. After all, it isn't really Necromunda without a few bright colours and some throwback styling!
Posted by Blazmo at 09:00:00 5 comments:
Email ThisBlogThis!Share to TwitterShare to FacebookShare to Pinterest
Labels: Escher, Necromunda, Oldhammer, Skirmish Games, WIP

Necromunda Ganger Names List - Over 500 Crazy Names for all Occasions! 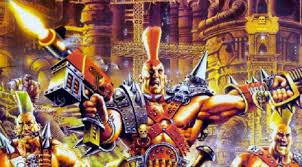 Presented in alphabetical order, this table will give you a great source of names and inspiration to spin your own tales in the sprawling underhive. It can be fun to randomise, as I've handily numbered them, or even to pick 2 names to create even more dynamic characters like "Tobias Tripod" or "Felix Fingers"!