How to Paint Non Metallic Metals 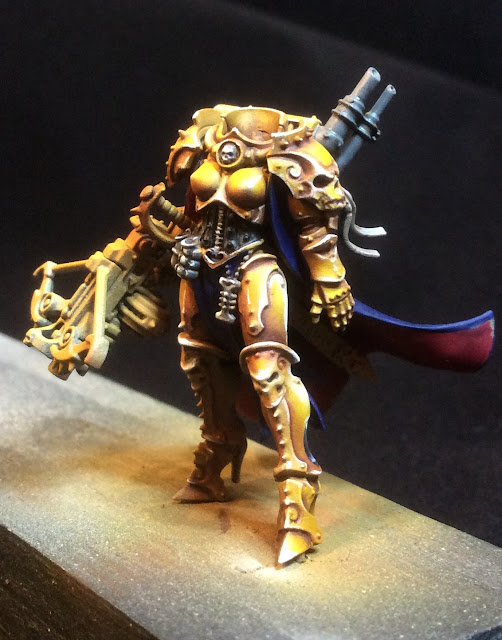 As part of my latest project, I've been working on painting Inquisitor Greyfax in Non Metallic Metal Gold. As a relative newcomer to this technique, I thought I'd share the insight I've managed to get so far and a few of the techniques I've been using to pull it together. I had initially planned this to be a fairly succinct article, but it has grown into a bit of a Behemoth as there are so many facets to the technique; so you'd better get your thinking caps on and your specs ready for this one!

Initially, I found one or two tutorials online to get an idea of how the technique is done. These varied greatly in quality, but the one that I found most helpful was:

http://razzaminipainting.blogspot.co.uk/2016/07/non-metallic-metals.html Darren Latham's blog, he doesn't post very often, but it's very interesting, well worth following especially for painters or anyone who is interested in Games Workshop.

It was especially useful, not only as good reference material, but also as he discussed the actual paints and colours used. From the tutorial, it was obvious that the keys were smooth blending (fairly obvious), contrast from dark to light, and adding pure white highlights in relevant places (probably the hardest parts). The whole pattern of shading had to be carefully considered as well if it was to look realistic. I won't bother to go into too much detail (ok some detail is covered later), as these points are discussed ad-nauseum all over the internet and for my part I'd rather talk mechanics, blending, and how I did it! 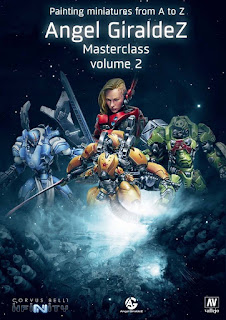 The other tutorial that I used was from Angel Giraldez's Painting Miniatures from A-Z Part 2. He covers creating a range of Non-Metallic colours using an airbrush and brush style. Unfortunately, you'll have to buy the book if you want to know the ins-and-outs of it as I'm not sharing his copyrighted material. Needless to say that my own method below was inspired by his book and draws on the techniques I built up after reading both volumes and experimenting with his style (which I've since combined into my own style as they were surprisingly compatible; a rare thing for me as I find a lot of painting tutorials clash with my own style and techniques).

I don't have exact paint names for a lot of this, as I did a lot of mixing and improvising as I went, although if you do want to follow a set of specific colours, they're listed on Darren Latham's blog and I was basing my work on his. It's important to note that there is no way to apply this technique "by the numbers" anyway as any application is going to take considerable artistic skill (and I'm still learning too). Even with those restrictions, I'm going to break things down as succinctly as possible and I hope people will find it some help, or at least interesting. 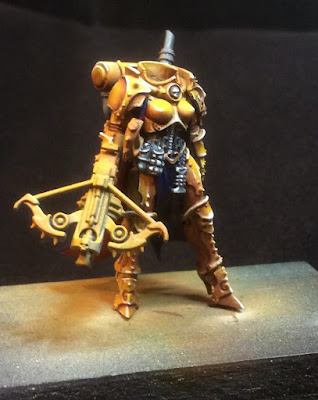 I used an airbrush, but it isn't necessary. If you don't have one, the same colours can still be applied, but you'll have to blend by hand from the start. I've written a section on blending later on, which I hope will be of some help. It'll just take a long time! 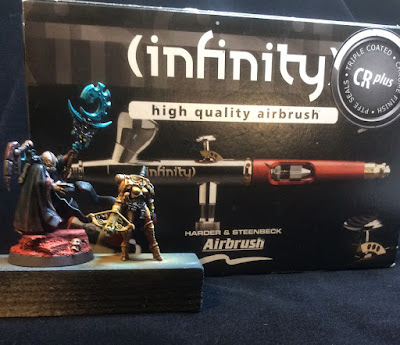 And with that, my quest came to an end .... or so I'd like to say, but honestly it was just getting started and I switched to the regular paint brush and set to work. To make it look like less work though, I'm going to start numbering again. I bet you feel motivated now...

If you're still reading this, then kudos, you might actually have enough attention span to make this work. I know I'm getting tired just talking about it, but the mini isn't done yet and there'll be endless layers of paint till we're done. I'm still adjusting mine as we speak (that makes it sound like I have my hand down my pants... but whatever). It really is all about hitting those highlights and going for contrast though, so keep at it. With that in mind, I think I should add a bit to the end on techniques and stuff. 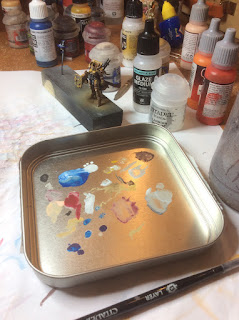 Everyone paints differently, so I can't hand any technique to you on a platter, but I can give you an idea of how I blend. You may have noticed my fairly heavy airbrush use these days. I use an Infinity CR Plus airbrush with a cheap compressor and Vallejo products (both thinner and cleaner). This allows me to lay down a highlight as fine as about 1mm radius; although control at that level is still a nail biting experience. I know I always advocate it, but if you are serious about airbrushing, Angel Giraldez's Painting Miniatures from A-Z books are a good source of knowledge; although they don't tend to cover too much in the way of mechanics, but mostly just walk you through how he goes about painting various colours as well as stuff for NMM etc. I bought the first book about a year ago, and haven't looked back since (although I had no idea what I was getting myself into at the time).

Anyway, I use the airbrush to lay down a basic blend (this is possible with a brush, but would take a lot longer). After that, I use a series of Glazes to blend the colours together further and to change the tones. A Glaze is a bit like a wash; only thicker. Instead of water I use 2 products, Lahmian Medium and Vallejo Glaze Medium. Interestingly, I've found that these both have very different properties, but both can be exploited depending on the situation. Both are a medium, which essentially means that they're paint with no pigment in it. This might sound like something that would be of no use, as they're completely clear, but they're both incredibly helpful products. Mixing the medium with regular paint lets you create a very thin translucent layer that doesn't run into the gaps like a wash or leave stains where it dries. It will allow you to "tint" the base layer with a colour that applies evenly across the surface. With multiple layers you can build up a completely smooth blend (it just takes a lot of time and patience!). 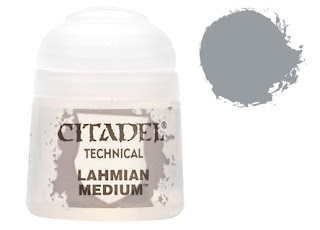 Lahmian Medium acts very much like GWs other paints; it dries quickly once applied and a thick mix can leave a strong edge. I tend to use it when I'm going for a stronger look, or where I want to be very direct about what I'm doing, but just want to get a smoother result; like when I did the dark edge on those panels, or later the white highlight.

Vallejo's Glaze Medium is far more interesting. As well as the same thinning effect, it retards the drying time of your paint incredibly. A thin coat will dry in about 2 minutes (compared to a few seconds). I've had paint mixed on my pallet with this stuff that has still been fluid days later (and no I don't ever use a wet pallet, so its just out in the air). The advantage of this is that I can add a layer of paint and while it dries I wash my brush and go in (with a just barely moist brush) and adjust the paint before it dries. This allows me to blend it in so that it leaves no "watermark" where the edge of the paint lies. Essentially it's completely smooth and seamless, but takes a very long time to build up the colour. For the purpose of my mini, this is the technique I used to adjust the blending and contrast after the airbrushing was complete.

The other thing to consider is the direction you're moving your brush in. Paint tends to pool and be the strongest when the brush leaves the model (especially with these thin glazes), so you should be dragging the brush towards the point where you want the colour to be the strongest. It's a bit of an odd one as it seems to be counterintuitive; you'd think that the colour would be strongest where you first made contact as logically you'd think that would be where the most paint was deposited. To make it a bit simpler, if I was shading, I'd start at the middle of the panel and drag down towards the darkest point.

As it is so central to NMM, I thought a quick discussion of light and direction would be appropriate. If you made it through my guide above (or are still even awake by this point), you might remember that layer of grey primer at the beginning, which I used to help me establish this. Anyway, generally you'll be thinking of creating multiple virtual light sources. By that I mean, you don't really have to shine a bunch of lights on the mini, but think of the direction that light would be coming from around it. In some ways I envy 2D painters as they can add light entirely from one direction, whereas working in 3D that'd leave half the mini pure black - not really ideal, but it does demonstrate the idea - that the colours will be stronger where the light hits and darker where it doesn't. While a mini, having a "dark side" isn't exactly ideal, it does give you some idea of how to work the shadows. For mine, the darkest parts would be the inner surfaces of the legs as even with 4 imaginary light sources (roughly evenly spaced around the mini) that area would still be dark. At this point I think I may have actually gone mad with all of this stuff as reading it back I sound like a lunatic, but anyway you'll either get what I'm saying or not. This stuff is hard to explain, but that's basically it. After that it's mostly that the light will hit any ridges, or bits that stick out.

I drew this terrible diagram of where the highlights are on my phone using a work in progress photo: