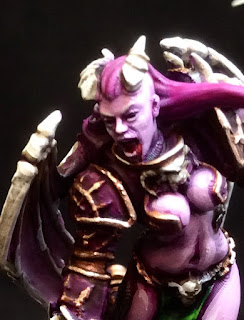 Keeping the Chaos posts going, I'm sharing this rather buxom unit today. I picked these up just over a year ago at Salute 2016 from a lesser known manufacturer; Prodos Games. If you've heard the name before, it is probably in relation to their highly successful AvP table-top game. These models are part of a game called "Space Crusaders" that they released a little while ago, and a unit of 5 of them is a reasonable £20. A pretty decent price for such well-sculpted resin miniatures. 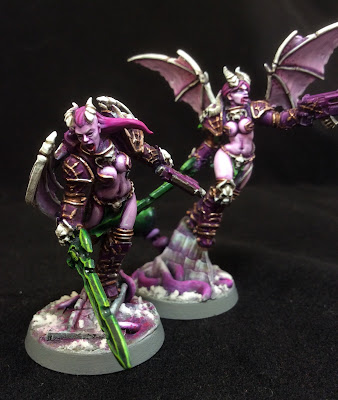 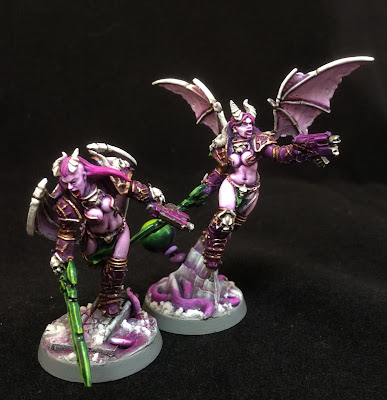 I'll probably do a full review in the future when I get more of them painted up, and a chance to take some more interesting pictures. That said, one of the things that I really like about them is the variety of poses. They're nice and dynamic.

I had originally planned to paint them up differently from my Emperor's Children as a separate force of Daemons, but why have two smaller forces when you could have one massive one with tons of options? Tough decision.

I've really enjoyed painting them so far too. The little skulls and bone details are great, and I've been using the same style on their skin as  I did with my Daemonettes which has worked out well. The details on their faces are also really cool, and I've been very impressed with how their expressions have come to life as I've worked on them. I've said it before, but when you're painting female faces, it's really important to keep the highlight fairly smooth and not too harsh, otherwise they look all craggy (which works great on rugged marines, but looks terrible on women). Just something to keep in mind if you're thinking about picking up a box of them.

Style wise, they might not be everyone's cup of tea, as lets be honest, that armour ain't covering much, or protecting from much either! I like them though, as part of the fun of Slaanesh is always keeping it bodacious and ostentatious!

I've finished 2 of them so far, with another two most of the way there. I'd love to get the squad done, so wish me luck on the last leg of the journey.