In the last episode we established what it took to make a nice bust - shapely, well formed, and certainly of a good size! In this episode we'll be catching up with my on-going project, so strap yourselves in and prepare to plumb the depths of some beautiful busts.

Those who read the previous article will know that it ended on a mostly postman related cliff-hanger (as I was waiting for delivery). Well the parcel has arrived and I now have my package firmly in hand .... that didn't sound right, I mean I've got my hands on my junk, ... my junk on a nice bust, yeah that'll do. Anyway, with the wait finally over there was nothing to do but spread it open and enjoy the goodies.

One thing was clear from the beginning; I was dealing with a very well formed bust. In fact the quality was high enough that I resolved to build and paint her to a competition standard. I was also certain that I wanted to follow through on the sci-fi theme.

One other thing was clear - I was dealing with a seriously big bust; something I could really get my hands wrapped around. In turn that would make it different than anything else I've ever painted. I've decided to try and finish it for Salute in London - where I will probably enter under the miscellaneous category- which gives me about a month of painting time. Unfortunately for the blog, I'll be keeping the final build under wraps from now on until the competition, so those crummy work in progress shots are all you're gonna get! (I know it's really gonna burn for the 20 or so people that will read this article. To appease my adoring fans here's a picture now it's in paint (I'm still not giving much away - playing it close the the chest you might say...) 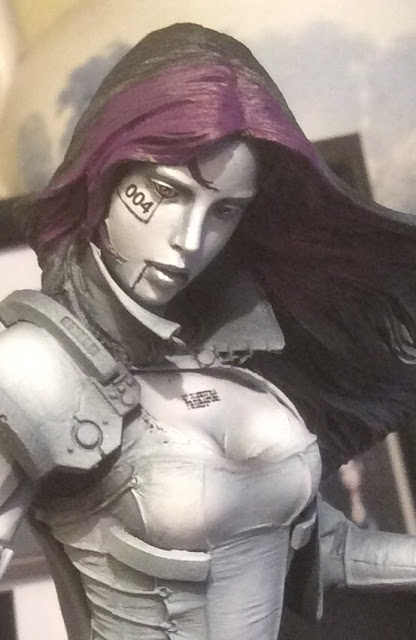