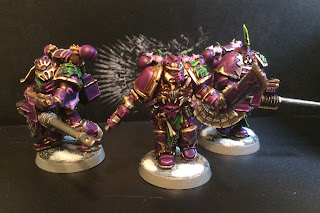 I've always liked Forgeworld's heavy weapon sets, but the autocannons appeal especially for some reason - maybe it's the massive belt feeds? I know that most people don't think that they're very competitive, but it's hard to argue with the results you can get with 8 S7 shots. I've blattered more than one monstrous creature to death with these guys and lighter armoured vehicles are easy pickings too. With 8 shots they're not bad against infantry - hitting on 3s and wounding on 2s from massive range. Now if only they had better AP or some rending!

I think the secret is saturation. One autocannon is a bit underwhelming, but 4 starts to look pretty mean. That and at 10 points a gun and a total squad cost of just over 100 points they're cheap and cheerful.

I never field my chaos force without them. They pair up well with my Noise Marines in laying down a hell of a blanket of shots.