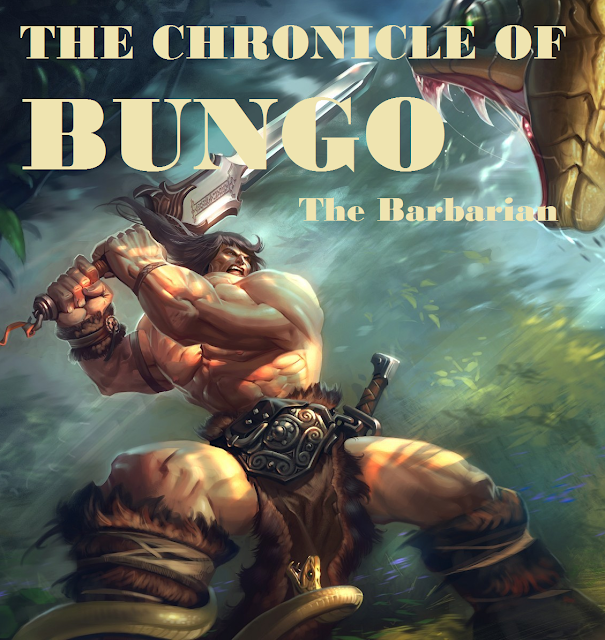 "Another Mead" he bellowed enthusiastically. His booming voice was punctuated by a dull thump as another buxom maiden fell to the ground; rendered unconscious from the sheer rapture of his manly presence.

Bungo took a heroic gulp of his drink, chugging back the beverage with warrior-like abandon; and spilling equally large quantities down his chiselled and bulging torso, eliciting sighs from the on looking villagers.

Suddenly the tavern door swung open and a cold draft of air blew through the building. The drunken rabble were momentarily silenced as a band of rakish outlaws swaggered boldly into the room. Their leader was a Sauranite Dragon-Man of easily twice the height of a mortal man. He approached slowly and loomed over Bungo menacingly; eyeing him like a hungry ogre looking at an unguarded playpen.

The distraction was all the time Bungo needed. He leapt into the air like a mystic tiger and slammed his armoured crotch plate into the Sauranite's excessive cranium. The massive creature cried out pitifully for a moment and staggered back bewildered. Bungo landed with a cat's grace.

"Bamm" he declared heroically; the Sauranite's head caved in on itself to the size of a pea - before exploding outwards in a generous shower of luminous green viscera. There was an ensuing ruckus as the other ruffians rushed to the door in a scramble to escape the barbarian's wrath.

Bungo looked down at the fallen Sauranite.

"Treasure map!" he declared as he gleefully looted the beast's still twitching corpse. He stuffed the piece of paper into his leather briefs and hastily finished his drink, before heading out of the tavern after the fleeing rabble.

Bungo the Barbarian - Chapter 2, Raid on the Temple of Booty

Leaving the coastal town of Derrowville far behind, Bungo ventured boldly into the wilderness. With the greasy treasure map as his only guide the journey had been difficult and more than once he had been forced to defend himself from gangs of enraptured slave-girls, love goblins and succubean visitations.

"They crave my manly flesh ... and who could blame them." Bungo mused as he flexed his bulging muscles absentmindedly.

As Bungo crested the hill, his hard set eyes explored the edifice before him. He checked the treasure map again and everything fit. The Sauranite's picture of the location matched it to a tee. He could see the large entrance and archway in the picture, next to what appeared to be a doodle of the Sauranite himself riding a fire breathing Pegasus and eating fried chicken.

"Excelsior!" He declared loudly; before heading through the darkened stone entranceway and into the temple. The interior was pitch black. Bungo couldn't see anything, but it was a momentary setback.

He tapped his crotch plate with one knuckle; eliciting a sound like a pealing bell. With his super keen hearing he could use the sound to detect objects in the darkness.

"You've heard of sonar" he declared to nobody in particular "now taste my Bone-ar". With that he rapped his codpiece vigorously and set off at a run, leaving only a vague echo and a cloud of dust in his wake.

Bungo the Barbarian - Chapter 3, Into the Unknown Booty

“By the power of Donglore” Bungo roared as he set about himself with his mighty blade. In his enthusiasm, he had run headfirst into a trap and was now beset from all sides by a salivating horde of Derpos.

“Foul Derpo, taste my justice” he bellowed as he slammed the phallic pommel of his oversized weapon into the beast’s mouth. He was rewarded with a loud derping noise as the creature deflated satisfyingly, leaving only an empty sack of Derpo flesh on the floor.

Bungo once again swung the blade wide at waist height, the Gloranite steel shone like crystal as it mowed through several advancing Derpos that dared cross it’s searing arc. They popped on impact and their carcasses whizzed about the room wildly under the force of the expelled methane within.

Bungo reeled back from the stench and in that moment they were upon him. A sea of rubbery bodies contacted with him and began to inflate; the Derpo’s deadliest attack designed to squeeze the life from their victims. The blade of Donglore slipped from Bungo’s hands as he fought desperately to remain conscious under their pillowy forms.

Bungo bit the nearest Derpo like a raging goat; tearing a large piece of blue flesh free. The creature deflated uncontrollably with a sound somewhat reminiscent of a Kallibonian Gassmonnog in heat; allowing Bungo to momentarily escape their grasp. He took a breath and grabbed the next Derpo with both arms before popping it in a savage bear-hug against his manly chest. Another Derpo faced an ignoble death as he lewdly thrust it to death against his steely crotch plate with a gyrating motion that would drive any woman wild with passion.

The remaining Derpos retreated in horror, with several more being caught and vigorously humped to death by the enraged barbarian.

“Bare your booty to me” he rumbled, before moving to open the chest. The lid squealed momentarily as he wrenched it open; revealing a single piece of Derpo excrement stained paper within.

Well, that rounds it out for this week's episodes. Join me again for another tale from the mighty tome known only as the "Chronicle of Bungo". Also remember to check out my miniature related works and follow this blog for more doses of irregular excellence.

Posted by Blazmo at 14:30:00
Email ThisBlogThis!Share to TwitterShare to FacebookShare to Pinterest
Labels: Bungo the Barbarian, Chronicle of Bungo, Fantasy, Fiction Writing, joke