Cid - The One Man Army 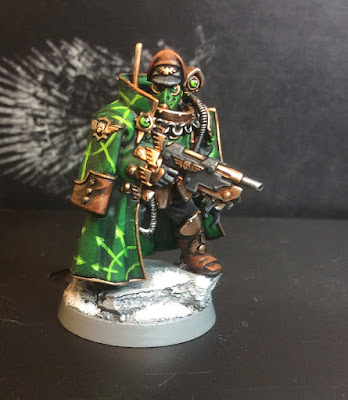 Feast your eyes on Cid - Lord of all Eternia! ... well maybe not. He's actually just the leader of some Scions for my Traitor Guard force, but I like the model a lot and over a few games he has obtained a sort of character the way models often do through their table-top achievements and failures. He is converted slightly - with a head made of 2 heads (the captain's hat) and a bit of a switcheroo on the weapons and arms. The pistol is actually from the Scion medic, which is why it has that cool saw and drill looking attachment.

Mostly he ended up being a bit of an exercise in freehand technique as I did a series of 8 pointed stars on his coat that I'm quite happy with. I particularly like the circle on his shoulder - I'm always worried that when I do straight lines over cloth it will look unnatural as it won't follow the curves and folds of the clothing. Luckily I think I managed to avoid that pitfall.

I painted on the designs in Moot Green, highlighted them, and then I went back in and glazed the folds with a darker green so that they would blend better into the folds of the cloak and not look so stark and obviously painted on top. 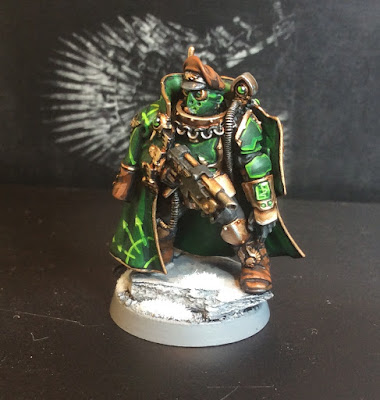 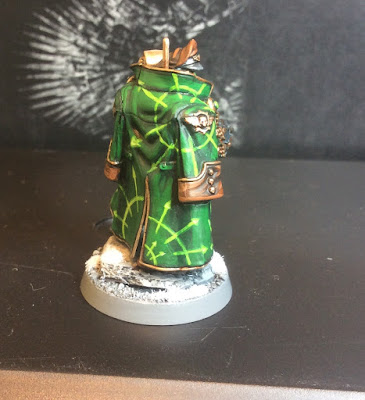 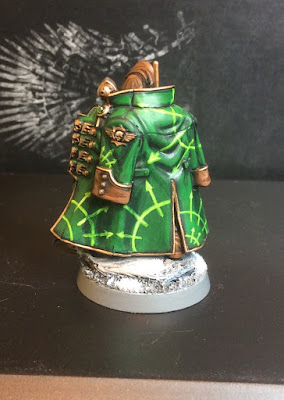 I also recommend using a limited palette (like Cid here) when working on horde armies. I try to restrict myself to green, brass, black and brown when working on the army in an attempt finish enough units to be able to play. Even with that approach it isn't working as I've yet to finish the unit of Veterans I started on 2 years ago....