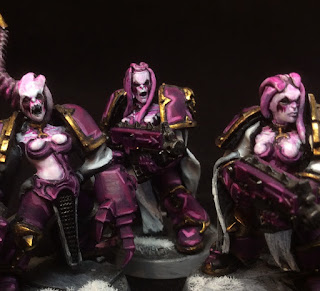 With everyone sitting around waiting for 8th Edition, I thought it was the perfect time to have a look through some of my old conversions from a time long before I had this blog. I'm planning to bring you a tantalizing glimpse of something Chaotic every day this week; with the hope that by the time that the new edition is out, people might be inspired to actually build something!

Now that the intro is done, today I have these finely crafted morsels for you. These conversions date back about 5 years, and use plastic Daemonettes combined with Chaos Space Marine parts and plenty of Milliput (they're so old, I didn't have access to green stuff back then!). 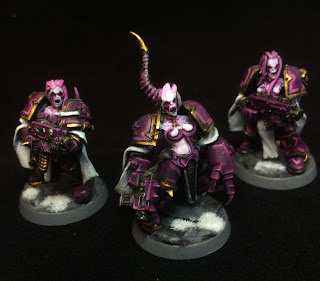 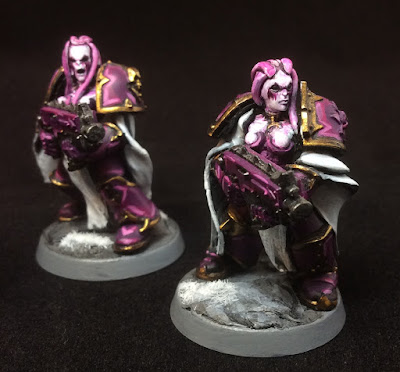 To be honest, these minis had been a bit forgotten recently, but now that I have them out, I think they actually look pretty great. I think it's high time they saw the battlefield once more.

I particularly like the champion with the powerfist. It's strange to think that she was actually the first model I built and painted for my Emperor's Children. They did become more conventional over time as the conversions were so extreme in the beginning that I just couldn't keep making them, as it was literally killing me.

Background wise I kind of envisaged them as Daemonically possessed marines who had been changed by the warp over thousands of years.

Anyway, leave a comment below with what you think, and check back tomorrow to smell what the Rock is cookin'... Or something...
Posted by Blazmo at 09:00:00
Email ThisBlogThis!Share to TwitterShare to FacebookShare to Pinterest
Labels: 40k, Chaos, Chaos Daemons, Chaos Space Marines, Conversion, Emperor's Children, infantry