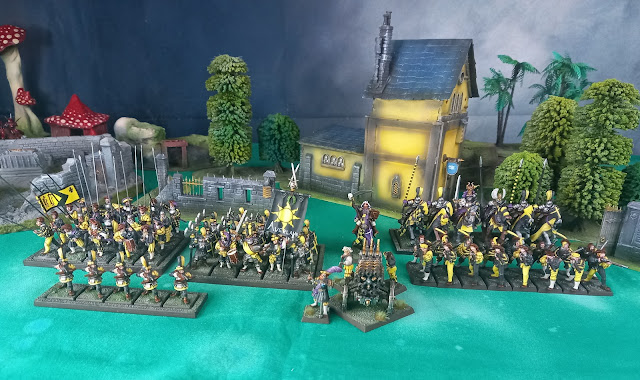 Continuing the army showcases, today we have my old Empire army. This force has come together in quite interesting ways, as Empire models are now incredibly expensive to get hold of, so I had to be a bit cunning about waht to buy. Some models are still available from Games Workshop as they have been amalgamated into Age of Sigmar's free cities, so the Helblaster was easy to find, but most other things took a bit of effort. Handily, I was given a load of old Battlemasters models. I hadn't actually heard of Battlemasters before last year's forray into old fantasy. Essentially it's an old board game made with GW intellectual property that featured a range of pretty good plastic sculpts. In this army, the halberdiers, kinghts and crossbowmen are all Battlemasters sculpts. 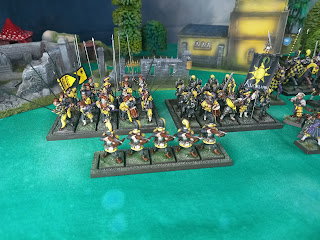 I remember when the first pikes came out for Dogs of War when I was younger and how exciting it was to have a new weapon in the game. If you're not familiar with old fantasy, it would probably seem strange to think that at the time there were about a dozen weapons in the game shared between all armies (two hand weapons, hand weapons, double handed weapons, spears, halberds), so something new was really exciting. The pike regiment are Landsknechts by Warlord Games. I'm really impresed with the models, and I've been using them as an allied in regiment in games using the dogs of war rules. Pikes are mean too - fighting with 4 ranks is brutal when it's not uncommon for a unit to attack with only one rank. Actually, the pikes do have an interesting thing in there - my first paper bnner in a very long time! It turns out that the secret is to varnish the paper a few times before you start painting to stop it from curling up. 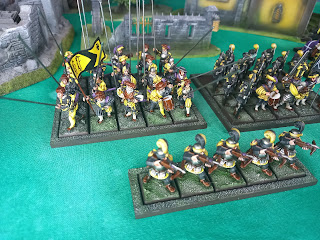 The crossbows from the Battlemasters set are pretty good, but their bows have very triangular ends, so I shaved down the bow part to make them look better. Their faces are a bit lacking in detail too, but they do the job, and I like the feathers. 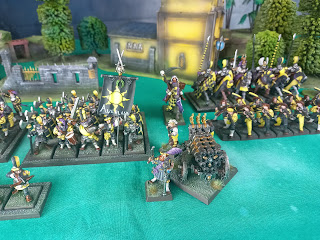 Handguns (below) are from the 6th edition box set. I'm not really a fan of the more modern plastics as I think the proportions for these guys are better. Handguns are a real mixed bag in old fantasy, as they only fire every other turn. With 2 ranks, you can fire them every turn by slowly rolling them forward, so a rank shoot each turn. In theory, I still think they're pretty shite, but being as they decimated a whole unit of Orcs in their first game, I can't complain too much. 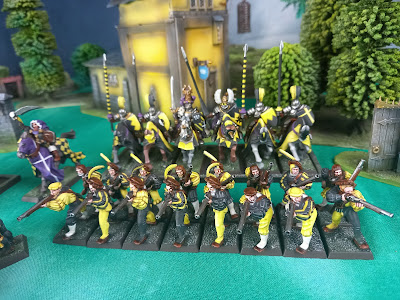 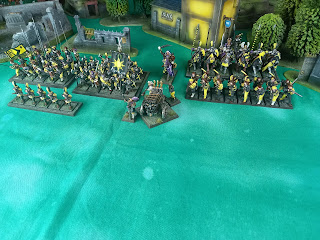 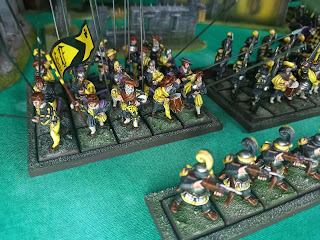 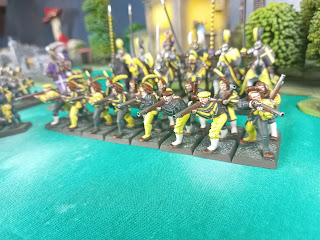 There are a few metal characters in the force - with a Knights Panther Grandmaster model being used as my general, metal wizard (below) and a Reiksguard captain leading the halberdiers. I was happy with the patterning on the Wizard's barding. I've done some patterning and stripes throughout the force and have been quite happy with the results. It's a lot of work though as I'm painting the yellow over a black undercoat. My one tip is that Balor Brown makes a good base for yellow as there's nothing brown about it and it's basically Averland Sunset, but is easier to apply! 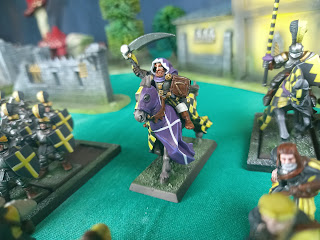 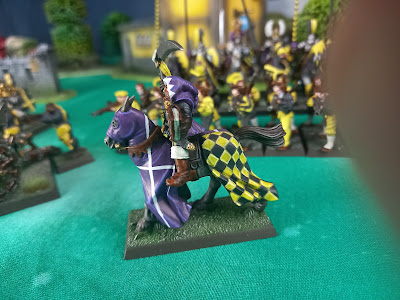 I think the army is at about 1200 points so far, but 1500 is pretty close, as my planned list involves adding a great cannon and Outriders, all of which are built and 2 outriders are already finished. There's also a Steam Tank in the works. 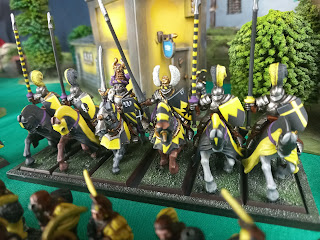