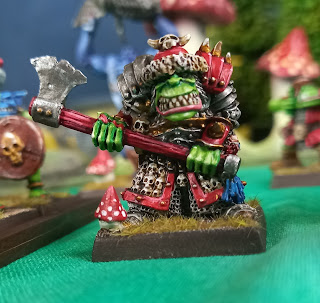 As promised, I'm back with some proper photos this time around. If you missed my last post, I did a head count on my progress from the last year and found that I'd painted 387 models. Getting them all on the table was a challenge in itself, and there was no way to get nice army shots, so today I'm back with a focus on the small new orc contingent I've been working on. You might ask, where are the Goblins (there is one hiding up the back), but the focus is on Orcs so they can ally with my brother's night goblin force. 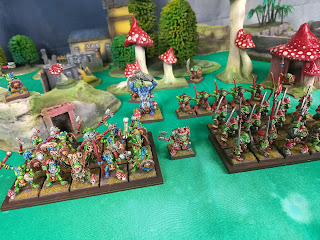 Overall, I'm really happy with this army. I've never really found a greenskin recipe that I liked until now, and the oldskool reds and blues set them off nicely. There's a mix of models here, with plastics from 5th Edition mixed in with Battlemasters orcs and a classic metal command for the big 'uns. I got a plastic troll for my birthday a few weeks ago too, originally from one of the starter sets. I'd love to source a few old metal stone trolls, but they're like gold dust! 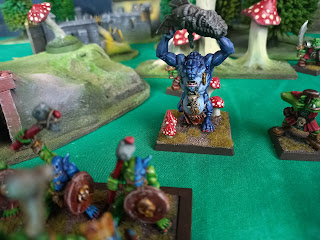 Classic plastic archers (below). Single pose sculpts have really grown on me. They look great when properly painted and they really take me back. 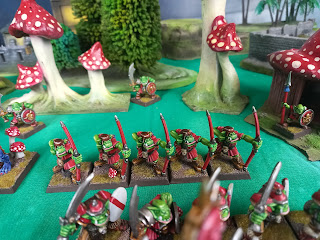 Savage orcs (below) are mostly Harelequin Models Barbarian Orcs, which are available now through Black Tree Designs. They were a bit of a Christmas present for myself. If you're looking at them and thinking it's hard to tell them apart from the GW ones, it's because they were also sculpted by Kev Adams in the 90s who worked on a lot of the older metal GW orcs. Speaking  of Kev Adams, the warlord model at the top of the page now known as Oglud Bonebeater is an old Heartbreaker Miniatures models also sculpted by the guy. It turns out he's basically single handedly responsible for filling the world with the joy of grinning derpy orcs - just how I like them! 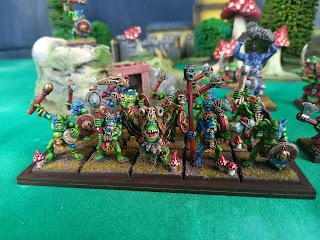 The Big Uns - I'm planning to split my orcs as the army grows so that the 5th Edition plastics (ones without helmets, and slightly smaller) will form a unit of regular orcs while the armoured battle masters orcs will be the more elite Big Uns. 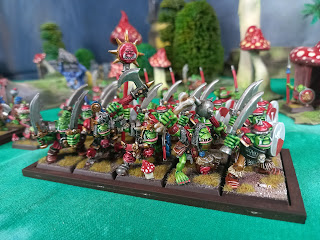 You'll notice a few spare models in the background that will be rolled into later units, they were out for the full head count! 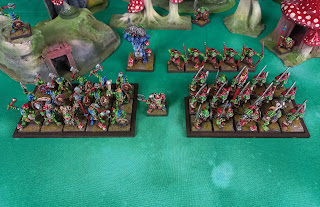 The scenery in these photos is all stuff I've been working on too and us scratch built as a set to match the army. Speaking of, I hand made the mushrooms on their bases too with some regular milliput. It turns out that it's not hard to do, and seems to be a pretty good thing to do with leftover putty! 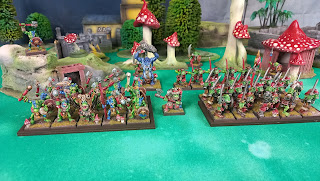