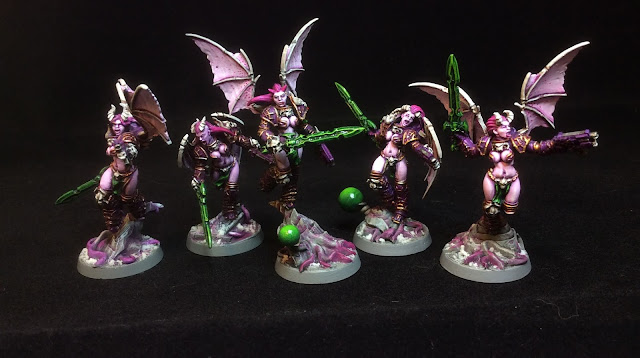 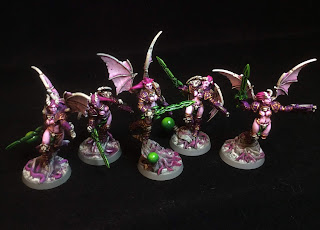 I finally finished my all-female Chaos Raptor squad. I think it has been about a year since I last worked on my Chaos, but I'm back in the saddle again and trying to finish off some of those units that were nearly there.

I'll forgive you if you can't remember my last post about these models. They are made by Prodos Games for a game called Space Crusaders. I picked them up as a random purchase at Salute 2 years ago and it's nice to get them out of the cupboard of shame at last!

Style wise, they're a bit excessive and buxom; so basically perfect for Slaanesh. Sure, they won't be everyone's cup of tea, but I really like how they look. They're really well cast too; easy to build, clean and have great detail. In particular, their faces were a real highlight to me. They weren't hard to paint and I think they look awesome and very expressive.

On the other side of things, all of that gold filigree and baroque detail was rather time consuming to work on! It also took a while to paint the bases and thing that were more detailed than usual. I actually built the bases myself using some tyranid egg sacs that I got from my brother. I have no idea what sprue they are from though, or if they're even still in the kits. 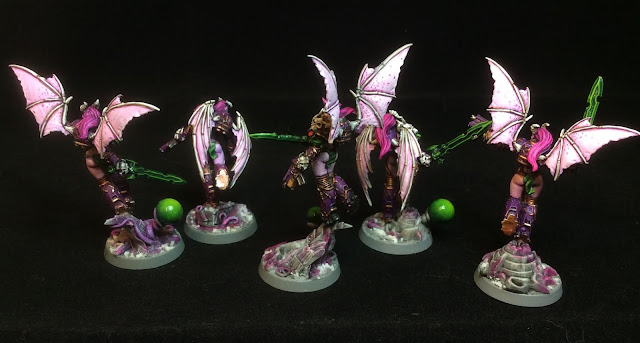 I've also been working on more of my Chaos, and I'll be posting another unit I recently finished tomorrow, so check back soon! I've actually managed to get a post together for every day this week, so look forward to it!
Posted by Blazmo at 09:05:00
Email ThisBlogThis!Share to TwitterShare to FacebookShare to Pinterest
Labels: 40k, Chaos, Chaos Daemons, Chaos Space Marines, Emperor's Children, Finished Work, Prodos Games