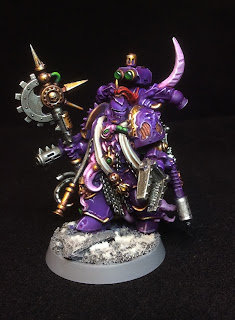 This is my converted Warpsmith. I built the model recently from a spare Plague Marine model that I got on eBay a little while ago. It took me a while to get around to building him, but I'm really glad that I did. I really like the paint job too, which I think has helped to make sense of the model as it is encrusted with so much detail that in bare plastic his chest just looked like one massive lump or something.

His head is from the heresy white scars upgrade bits (which I bought just because they're cool). I was lucky in that I had a spare axe head from the tech priest dominus in my bits box after I built my 40k Skaven conversion, and it just seemed like thee perfect part to use. 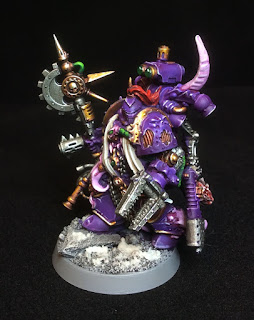 With 8th edition, lists favour having 2 HQ choices, so I know I'll get a lot of use out of him. That and his stats, equipment, and the ability to fix vehicles are pretty good; especially considering his fairly reasonable points cost. 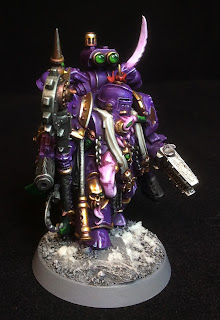 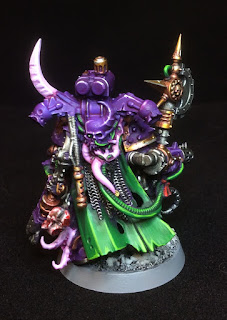 Overall, I'm really happy with how the model came out. I'm almost surprised myself that he used to be a plague marine!
Posted by Blazmo at 09:05:00
Email ThisBlogThis!Share to TwitterShare to FacebookShare to Pinterest
Labels: 40k, Chaos, Chaos Space Marines, Characters, Conversion, Emperor's Children, Finished Work, Games Workshop