Bungo The Barbarian - Chapter 9, The Tomb of Doom 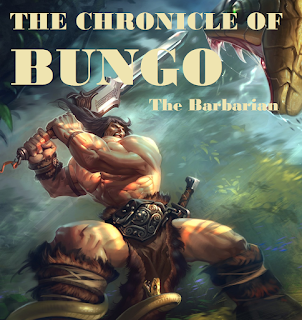 An earth-shattering detonation rocked the chamber as the directed energy beam scythed through the air; reducing everything in its path to dusty disintegrated rubble in an instant, before finally impacting on the far wall with an impressively pyrotechnic eruption. Even the vast collection of iron swords that hung in grim decoration had been reduced to nothing in a blinding instant; their steely blades no proof against the Derpo’s arcane technologies.

But there was no sign of the hollering man ape barbarian.

The Derpo King wiped the bountiful sweat from his brow with the back of a rubbery hand; eliciting a squealing noise like nails on a chalk board. He muttered a bitter curse as he began the reload cycle and the sorcerous weapon once again began to shudder; choking into life and discharging vast quantities of methane into the air as its energy crystals overflowed in a slowly creeping miasma.

“I don’t care if you’re alive or not” he crowed. His high pitched voice echoed through the dungeon’s now silent halls. He grabbed the ignition leaver with both hands; preparing to unleash another deadly torrent.

“This place will be your tomb manling!” he spat the words furiously; his eyes wet with tears at the thought of his lost knitting enterprise, and in his mind the loss of his people’s economic security.

It was in the midst of this rather one sided exchange that he suddenly caught a glimpse of a strange shimmering shape in the air above him.

“Excelsior!” cried Bungo from his lofty perch as he initiated a dive-bomb manoeuvre that closely echoed the attack runs of the great avian predators of Morgax.

Only mere moments before the blast he had grabbed hold of Shallica’s succubean horns and taken flight to escape the wanton destruction wrought by the Derpo King’s fierce weapon. Her entrance into the chamber had gone unnoticed in the struggle, and Bungo’s daft adversary would soon come to regret the mistake. The barbarian had mounted her sensuous form in a strange parody of a piggyback ride; the picture was as amusing as it was deadly, but markedly more lewd than either.

“What the hell is wrong with you people?!” The Derpo King screamed; fleeing in terror as the strange cavalry bore down upon him. His waddling gait and clumsy flapping feet made escape next to impossible and the lurid pair grew ever closer. He had only made it three cumbersome strides when he turned in horror to see Bungo sailing through the air on a direct collision course. The barbarian had abandoned Shallica in mid-flight and was now soaring towards the wildly defecating Derpo; his hair billowing in the wind as he made the heady 20 foot drop with ease.

The world seemed to go into slow motion as Bungo’s bulging elbow drop came to a thunderous end; connecting directly with the Derpo King’s head. For a single heartbeat the rubbery flesh seemed to absorb the impact as Bungo’s arm disappeared right up to his shoulder in the cranium of his unprepared adversary. There was a momentary delay before the Derpo King’s eyes bulged out of their sockets to three times their usual size and his head imploded inwards in a fantastical expulsion of methane that drove his shrivelled body into the ground; before pinging about the room.

“Don’t be so hot headed!”  quipped Bungo; standing proudly with his hands on his hips and pulling a few manly poses that Shallica seemed to appreciate with hungry enthusiasm. In truth she was still overcome from the excitement of having Bungo suddenly leap on her; and had been in a daze ever since.

Unfortunately for the heroic duo, the moment of victory was short lived. The Derpo King’s shrivelled body flew by one last time before finally coming to rest in the worst possible place; directly on the Death Ray’s ignition leaver. The was an ominous clunk as the dooms-day device switched from idle and into overload and the whole chamber began to collapse as the nebulous energy ball started to unmake the world around them.
Posted by Blazmo at 14:05:00
Email ThisBlogThis!Share to TwitterShare to FacebookShare to Pinterest
Labels: Bungo the Barbarian, Chronicle of Bungo, Fiction Friday, Fiction Writing, joke