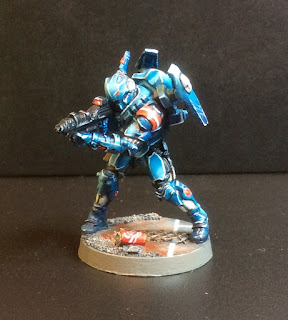 Things have been a bit quiet on the hobby front for me for the last few days. With that in mind, I decided it was the perfect time to break out some shots of my Infinity stuff that I've been slowly working on for some time.

A week or two ago I was digging through some of my work in progress drawer when I came across most of the PanOceania starter set from Operation Icestorm (the starter kit for infinity). I had painted some of the models, but most of them had been undercoated and airbrushed with the basic blue colour blend without having any of the details finished. In a moment of hobby indecision, I picked them up and started working on them just because it seemed easy and they were nice models.

Anyway, this is the Sikh Commando, which is a sort of drop trooper (hence the techno-pack on his back). I'm really happy with the way he came out - especially the blend on the armour panels and the overall effect it has given. I've relied heavily upon the trachings of Angel Giraldez for this one and his rather interesting Masterclass book (well recommended for anyone with an interest in airbrushing or infinity).

One of the things I've really enjoyed when painting Infinity stuff is not just the really nice sculpts they're producing, but also the semblance to modern day. It was cool to be able to cut a length of old spear pole to shape and use as a drinks can on his base - I like the look a lot and it's one of those touches that would just be totally "wrong" in 40k, but makes a nice feature here.

I'll be posting more of the faction later this week, so stay tuned for some more shiny blue dudes! 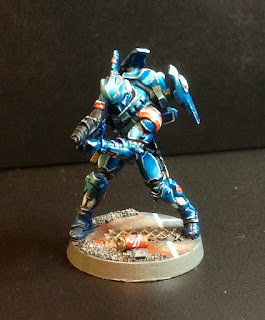 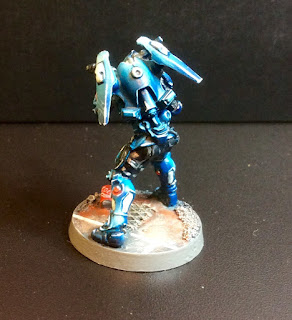