Bungo the Barbarian, Chapter 10 - The Stench of Success 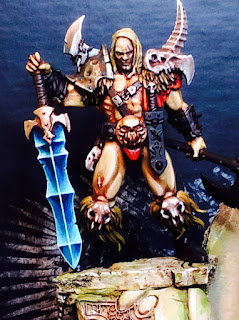 The entire dungeon shook violently as Bungo made his escape. Together with Shallica he had managed to put some distance between himself and the overloading doomsday machine, but he was still being pursued by the rapidly expanding energy bubble. He occasionally dared to glance back into the blinding florescence of the cataclysm, but there wasn’t much to see; the bubble was disintegrating everything in its path.


As they rounded another twisting corner, the corridor seemed to convulse for a moment as reality began to crumble; Bungo’s top heavy heroic form wasn’t well suited to balance and he staggered into a straining dungeon wall. The wall collapsed in a dusty explosion and Bungo fell through the breach; landing in a panting heap on the mossy floor.


“Moss?” queried the barbarian, addressing nobody in particular. It was at that moment that a heroic epiphany came upon him.


“This way” he hollered boomingly; his mighty voice was partially drowned out by the rumbling of the cataclysm. Shallica appeared in the air above him moments later as he barrelled headlong down the dank passageway.


“Moss means water!” he yelled above the crumbling cacophony as his feet beat a rampant tattoo on the overgrown stonework beneath him. Taking a running jump, Bungo’s mighty form shaped a human cannon-ball as he burst through the next wall; plunging straight into a previously undiscovered underground river.


“By Donglore!” gargled Bungo; spitting out a large quantity of rancid water. In truth it wasn’t so much an underground river that he had dived into, but more a purpose built Derpo sewage aqueduct. The incorrigible barbarian fought to keep his head above the foamy waters and away from the sea of raw faeces that were floating by, but simultaneously holding his breath and his nose was draining his strength as much as navigating the tumultuous rapids.


A great splash momentarily distracted the hero as Shallica’s unconscious form dropped into the aqueduct’s murky waters. Unknown to the barbarian, her flight had been arrested when she was overcome with the heady fumes; the reeking miasma had proved too much for her delicate demonic sensitivities and her well-formed body was now rolling adrift amongst the waves.

Bungo’s muscular arms scythed through a particularly gigantic floater as he tore through the water towards her. He managed to retrieve her unconscious form just in time to see a light at the end of the cavern ahead of them, growing closer by the second.


“Excelsior!” the cry of victory was cut short as Bungo once again regretted opening his mouth; having taken on another gulp of filthy water punctuated by what appeared to be a half-digested corn cobb.


Spluttering uncontrollably; the filthy pair emerged from the mountain’s underbelly with only moments to spare. There was a loud rumbling sound from deep inside the temple; punctuated by a blinding flash of light as the edifice collapsed in on itself. The once proud entranceway was the last thing to disappear into the dusty ground; leaving no sign that the dungeon had ever existed.


Bungo hauled himself from the river bank with a grunt of exertion; placing Shallica’s comparatively diminutive form on the dewy ground. She was breathing steadily, but showed no signs of regaining consciousness any time soon.


“They will never know of my heroic struggles, but I require no thanks from the realms of men.”


Bungo had turned into the slowly rising sun and was busy forming a grimly heroic silhouette in the foggy morning air. His hair billowed fiercely in the westerly wind that blew across the vale and his face was stern; steely in contemplation. The image would’ve been somewhat more evocative if it weren’t for the generous lashings of raw sewage that were running down his chin and splattering messily against the ground at his feet.


With no audience to appreciate his dramatically herculean musings, Bungo began the long walk back to town in silence with Shallica firmly wedged under one bulging arm.

Posted by Blazmo at 10:45:00
Email ThisBlogThis!Share to TwitterShare to FacebookShare to Pinterest
Labels: Bungo the Barbarian, Chronicle of Bungo, Fiction Writing, joke