Bungo the Barbarian, Chapter 12 - Horror of the Meat-Sabre 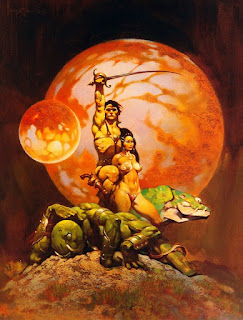 Bungo upturned the breakfast table with a guttural grunt; sending as spray of creamy porridge and half eaten morsels across the room. He was just in time to deflect the first bolt as it slammed into the sodden table top a moment latter. The sound was followed rapidly by another bolt that whizzed past the makeshift shield as the Barbarian took cover from the bounty hunter’s advanced weapon.

Having left his sword upstairs the night before, Bungo was unarmed. Looking around for a weapon, his eyes fixed on a particularly large and bulbous Hero Sausage that was flopping wetly on the ground around his feet. He hefted the rubbery meat-sword with one large hand and prepared for battle as another two bolts slammed home into the straining wood.

As Bungo was struggling to think of a way out of his predicament, an unexpected scuffle broke out on the other side of the room. It seemed that Shallica had leapt onto the bounty hunter’s back and was busy putting her incisors to work on the soft tissue of his exposed ear. The man threw her to the ground a moment later, although she fell away with his dismembered ear still grasped grimly in her razor-like teeth.  Screaming in pain; he aimed down and prepared to finish the insatiable she-demon with the weapon that she had failed to wrestle from his grasp.

In that deadly instant Bungo leapt from behind his barricade and let fly with the flopping meat-sabre. The sausage flew through the air like some ghastly blimp before impacting in a wet splosh on his adversary’s dumbstruck face. The man reeled back momentarily in pain and the opening was all the time Bungo needed to tackle him to porridge soaked the ground.

The two men wrestled through the creamy juice in a life or death struggle. At some point Bungo had torn the shirt from his adversary’s back and the two underpants-clad combatants were now covered in greasy white porridge. The scene continued for several minutes, with neither man particularly gaining the upper hand as the fight devolved into one of the most homo-erotic combats that would ever be fought. Occasionally the bounty hunter would reach for his crossbow, only to have it batted away across the room. The undulating man-wadge seemed to show no signs of separation any time soon.

After dusting herself off, Shallica had resumed her position shooing away the on-looking villagers, and was now seated on a tall bar stool with a good view of the action. She occasionally hovered above them or behind for a “close-up” when Bungo was in a particularly suggestive pose, but couldn’t stay on her feet to long in the face of such rapture.

As the fight entered its sixth minute, Bungo finally seemed to get the upper hand. Straddling his opponent’s chest and pinning him to the ground, he reached out and snatched a jellied hero sausage from the gooey floor.

“Your death would’ve been a lot cleaner if I had my sword!”

The Man’s eyes grew wide with terror as realisation dawned on him. Bungo grabbed his opponent’s mouth in one powerful hand; prising it open. With escape impossible, he slammed the bulbous sausage home straight down the bounty hunter’s throat. The meat-sabre disappeared twelve inches into the unwilling orifice and stuck hard.

“Choke on my meat!” Grunted Bungo as he clamped the man’s mouth shut. The scene was punctuated aptly, as his adversary’s wheezing breath sent a spray of creamy goo slapping onto the barbarian’s oily chest.

With a sound like a blocked drain gargling its last, the bounty hunter’s eyes rolled into the back of his head and his body went limp in Bungo’s grasp.
Posted by Blazmo at 09:05:00
Email ThisBlogThis!Share to TwitterShare to FacebookShare to Pinterest
Labels: Bungo the Barbarian, Chronicle of Bungo, Fantasy, Fiction Friday, Fiction Writing, joke