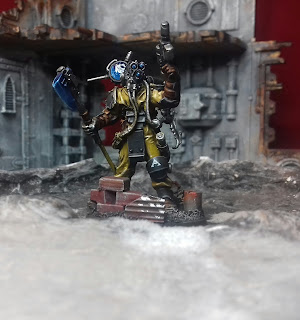 This Tech-Priest was a bits box built freebie. I wanted him to look a little bit ramshackle and less-preferred by the Mechanicus. The kind of guy who would run some type of tank junkheap and get annexed to an armoured column aas he was the best of what was left!

I've always got plenty of stuff about the place from years of building and collecting. The biggest part of this guy is a Renegade Tank Commander body from Forgeworld. I've had the part for a while, but had never done anything with it. It actually only goes to the knees, and had no arms, so I built on top of it as a base. 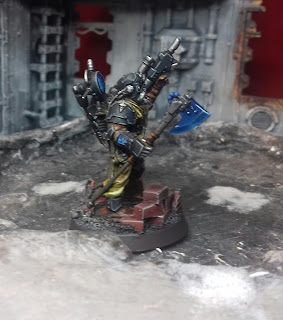 I used a plastic pair of legs from a different tank commander to get him on his feet. After that, A pair of Scion arms and a Heresy resin power axe with a brass rod haft brought the look together. 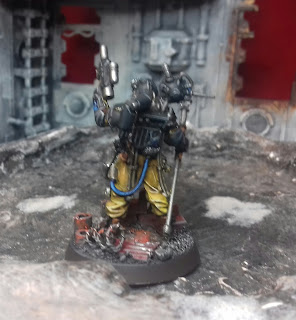 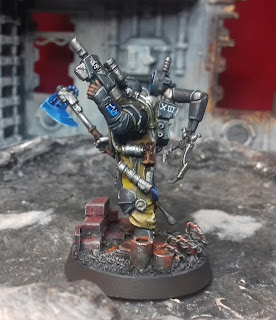 His backpack was cut off of a Kreig vox caster (who I had converted to have a cloak in my sniper unit, so I was cutting it off anyway) - the robot arm is an upside-down Necron arm with a bit of a Dark Eldar Scissorhand attached. Yep, he's made of bits from pretty much everything! Oh, and his crotch-plate is part of an Onager Dunecrawler. 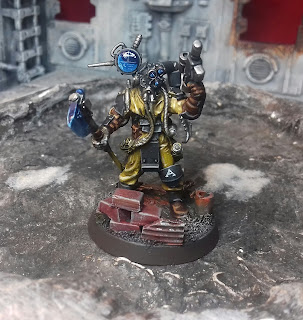 Anyway, he's ready for battle now, and painted up to match the rest of the force. Fixing vehicles is pretty good in this edition of the game and as a cheap choice, I'm sure I'll get plenty of use out of him.