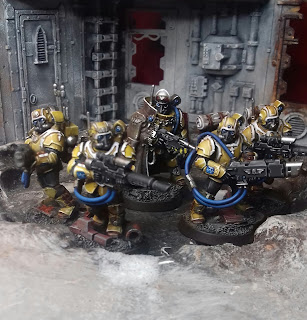 Another Steel Legion post today - just showing my recently completed unit of Stormtroopers. You kind of have to call them Stormtroopers for Steel Legion as they pre-date all of that Militarum Tempestus stuff, and that's how they're referred to in the books too.


I enjoyed painting these guys a lot too as they're a little bit different from my usual infantry models. They really came alive when I did the blue details too - like all the pipes and stuff. I tried to make the screens on their wrists look like some kind of bio-readout monitor thing, so I did a heart-beat shaped thing on each one. Equally though, it could be some kind of vox signal (or maybe Codec like in Metal Gear?) 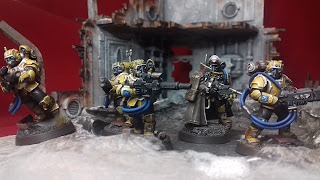 At some point, I'll have to get another 5 so I can have a full unit. For the moment, there's no rush as they're not in any of my planned lists, and I've got so many other units to finish that I can't justify buying anything new. My Steel Legion have become a bit of a dumping ground for older guard army projects - these guys were originally earmarked for my now defunct Traitor Guard force, so they were basically free as I had them laying about the place anyway. The upside and downside is that I have tons of tanks to paint up too! 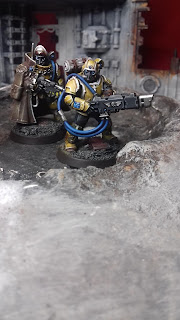 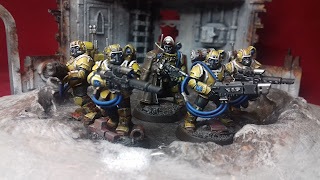