It's time for the battle everyone's been waiting for:

We finally got the game in that was the inspiration for my Necron force from the start. With only the "Start Collecting" formations at our disposal and a cool £50 worth of models each. 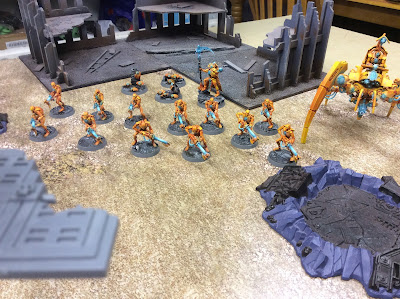 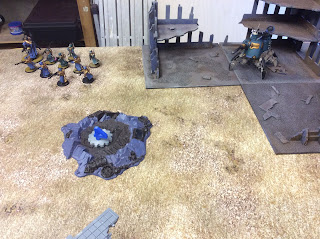 The plan was clear from the get go. The formation included with the Necron force allows you to bring back your unit of warriors and scarabs infinitely once they are destroyed, the only limit is that they have to come back in 3 inches of the Necron Overlord. As we weren't playing for kill points, but an objective based battle I planned to just march towards him and wear him down with waves of men. As long as my Necron Overlord stayed out of the way and didn't get killed I'd have an endless horde army. I'm telling you, this is genius!

We rolled off for first turn, which I won, so I deployed first. The mission dictated objectives and a corner-to-corner deployment zone. It wasn't ideal for me as all my weapons are 24" range, meaning that the extra board space would be exploitable by my opponent, but with regenerating units I didn't care too much.

I deployed my forces in a line at the edge of my deployment zone with the Overlord out back for safe keeping. I flanked the Warriors with the Triarch Stalker and Scarabs.

Skitarii
The Battle began with an upstart as Ed managed to seize the initiative. Surprised by this turn of events he moved his units forward and excitedly fired his Neutron Laser at my Triarch Stalker. I gasped when he got a direct hit (the thing is S10 AP1, so it wasn't looking too good for me), but it bounced off of the quantum shielding. With that his turn came to an end as his other unit was out of range.

Necrons
I drew my objective cards and immediately fell about laughing. I had the same objective 3 times! to top it off it was "take objective 3", which was right in the middle of my deployment zone. I trudged the force forward and left Nel'Dhar to hold the objective by himself. I moved the Triarch Stalker at full speed to try and get in range with it's heat ray (basically a 2 shot multi-melta). It was fairly obvious that the battle between our vehicles would be decided fairly quickly and I needed to get in range as soon as possible. The scarabs moved laterally across the board in an attempt to flank Ed's troops. As I was out of range, I ended my turn and claimed my 3 objective points. Things were looking good so far.

Skitarii
The Skitarii turn began with a literal bang as the shooting phase delivered the games first casualties. His squad blasted two bases of Scarabs off the field and left the other base with 2 wounds. Catastrophically for me, my Triarch Stalker took another direct hit from the Neutron Laser that this time penetrated it's armour and got a "weapon destroyed" result. With only one gun it was basically dead in the water (although I could still enjoy it's +1BS aura, but it's impact on the game would be limited).

﻿
Necrons
My warriors rounded the corner (with the Stalker in toe for +1 BS) and took revenge on the Skitarii forces with a devastating BS 5 salvo that resulted in 8 wounds and subsequently 5 deaths. With that the rangers failed their morale check and almost ran right off the field (but not quite), taking the Dominus with them. My Scarabs moved onto objective maker 2 and claimed me another point. 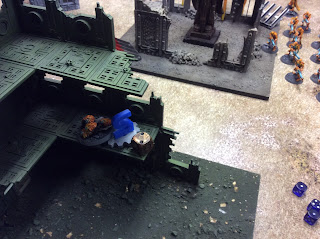 Skitarii
Fortunately for both of us (as the game wouldn't be very fun!) the Skitarii forces didn't run off the field and managed to turn themselves around. That Neutron Laser took aim and blasted a massive hole in my unit of Necron Warriors, with a death toll of 4. I wasn't too bothered as I could bring them back again if I needed to. Ed was rightly ignoring my crippled Stalker.

On my turn I attempted to charge the Tech Priest and his unit with my one remaining base of Scarabs. Moving as beasts makes then quite fast. They were summarily cut down by a combination of over-watch and higher initiative attacks. No worries though as they'd be back at full strength next turn. My Necrons moved forward and opened fire, but the Tech Priest took all the hits. We managed to get 1 wound through his save though, but it was a bitter victory.

Turn 4
Skitarii and Necrons
Another blistering salvo from Ed and my unit of warriors was reduced to 4 iron clad avengers. The Dune Crawler was moving and trying to get a bead on my Overlord (by travelling sideways across the board). By this point Nel'Dhar himself had moved up in support, but was mostly just hiding from the instant death S10 cannon that was searching high and low for him. I spawned 3 more Scarab bases and threw them towards the stalker, but I didn't manage to get the charge in the end. The Warriors moved round Ed's Skitarii unit and fired from the side - this time managing to take out the Alpha before all of the other shots were tanked on the Dominus to no effect. 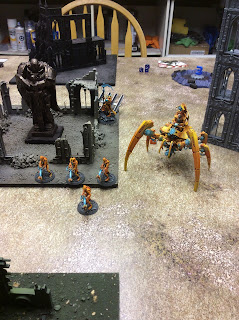 Turn 5
Skitarii and Necrons
Ed blasted my swarms off the field unceremoniously again and proceeded to move sideways with the Dune Crawler in an attempt to corner Nel'Dhar (who at this point was cowering behind a flimsy piece of wall). On my turn my warriors opened fire, but fell foul of that 2+ save and feel no pain. I spawned the Scarabs again and threw them at the Tech Priest's unit; engaging them in a round of close combat. They managed to kill 2 more rangers, but it was obvious they wouldn't last long. 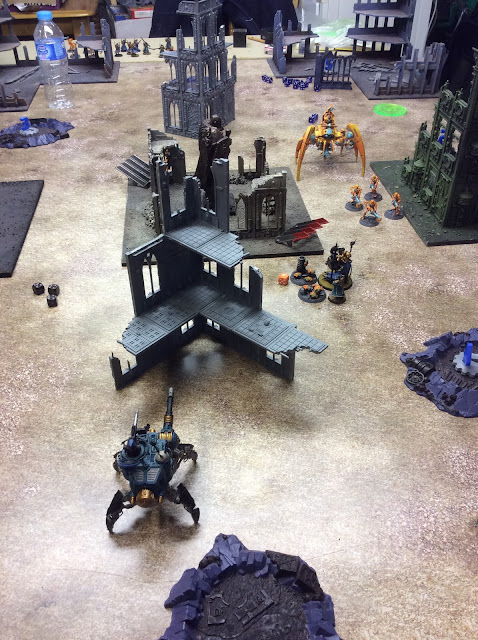 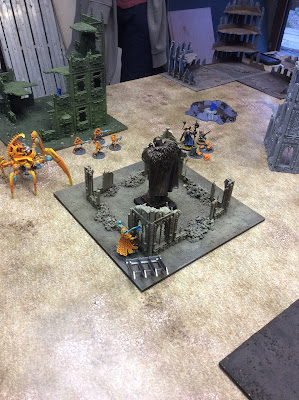 Turn 6 and Endgame
Skitarii and Necrons

The Skitarii won the combat with ease and regrouped. Ed's Dune Crawler continued to look for the kill shot on Nel'Dhar, but failed to get line of sight. Assuming that the game would end on my turn I broke from cover and moved Nel'Dhar towards Ed's Dominus, figuring we'd end the game with a nice scenic challenge. Unfortunately I didn't make the charge. I fired off a few more shots and that was it.

It was then that disaster struck, the game went to another turn. The Neutron Laser cycled round and left a smouldering crater where brave (or actually incredibly cowardly) Nel'Dhar once stood. I fired his resurrection orb in a last ditch attempt to save him, but a re-rollable 6+ wasn't much of a bet and he didn't make it. The game was really over when the Dominus fired his Eradication Ray and the Triarch Stalker exploded - leaving me with 4 Necrons on the field!

With that the game ended and we added up our objective points. Unfortunately Ed had first blood and Slay the Warlord as well as one or 2 points from destroying units in various phases. Overall he took the victory by 1 point despite my early lead. I guess it goes to show that you don't need a lot of points in order to enjoy a close and surprisingly tactical game.

Special shout out to Jack, who leant us his garage and scenery for this epic battle. He even supplied water for the thirsty generals!

In other news I just got my first advertising revenue - 6 American cents. I knew all those hours of work were worthwhile!  It's a life of counting money and drinking beer for me - adios amigos, I've hit the big time. I'll remember you all when I'm on my private jet, sitting on a throne of pure platinum and enjoying being gently fanned by my extensive harem.

Don't forget to check out BERSERKERBLADE too for more of the saga: