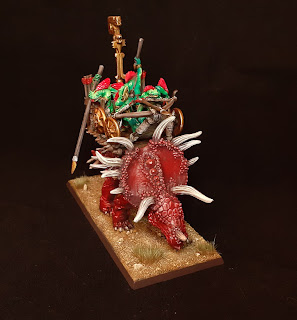 Monster March is still in full swing. I finished my Dark Elf Dragon last week, and to follow it up I've been working on this metal 1990s Lizardmen Stegadon. After a week of work, the Stegadon is finished!

This is a classic model that means a lot to me as Lizardmen were my first army ever, and  the Stegadon was one of the very first models I ever owned. As with the rest of my classic Lizardmen, I've followed the colour scheme I used when I was younger, so the skinks are green and the Stegadon is a fetching dark red. 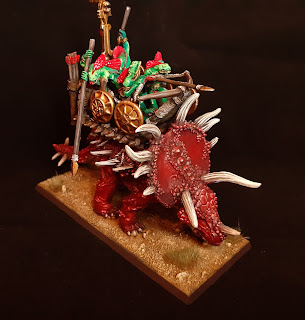 In the end, it didn't take too long. It was a pain to build though. It's all metal, and I had to pin a lot of the bits - especially the Howdah to make it good and strong. When I was a kid, I mostly just drenched it with superglue and then painted what I could reach. I wanted to do a better job this time, so I painted it in 3 chunks - one for the actual Stegadon, then the howdah and finally the 6 crew. 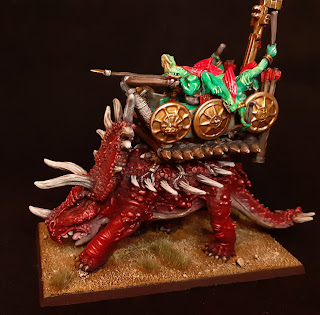 In addition to being a big nostalgia tank, this thing also weighs about as much as a tank. It's solid metal and is basically a house brick... with points on it. It also makes a big chunk of my 1000 point plan, and puts me in a good position to move the army on towards that goal. I've recently finished the skink cold-one riders. My planned list is almost done, with just 5 more saurus warriors to paint.
The other thing that has been nice has been having this thing on a real base. The actual model never came with one, and was part of that era when a lot of metal things didn't have bases at all and just sort of rolled around on the green flocked plains of the old world. Anyway, it fits a chariot base nicely. 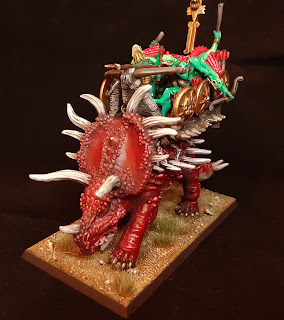 Well, that pretty much rounds out my Monster March this year. Maybe I'll just try to paint whatever I have about the place as a final pledge for the last week. I'm batching a bunch of Skaven right now, so maybe if I paint enough of them, I might get a final photo. I really should be working on those final saurus though. The horror of having so many projects on the go!

Head on over to Path of an Outcast to see how the other entrants are doing. I have to say, I was shocked to read last week's update as Gav Thrope has joined the event. Exciting stuff!

Path of an Outcast