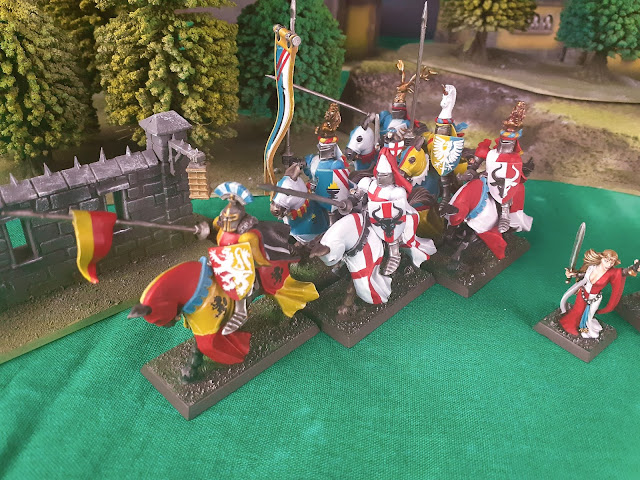 So, a few weeks ago, I posted a few photos of my finished 5th Edition Lizardmen force. I did mention that I'd also done a matching Bretonnian force - and here they are in all their splendor! I got all the scenery out lately for photos, so more pictures of some of my old fantasy stuff should be inbound soon.

These guys and me go way back. In fact, they live in constant terror that my childhood self may return to abuse them once more. Luckily for the men of Bretonnia, I felt guilty for my past transgressions and in some kind of lockdown-induced haze, I decided it would be a good idea to finally get them back in fighting order. Many repairs and paint strippings were had by all and this force is the final result.

For those that don't remember or weren't there, these guys were part of the original box-set for Warhammer 5th edition that featured armies of Lizardmen and Bretonnia clashing over what appeared to be a tower, shack and barn. Anyway, they're ready for war once more and I even sourced a metal sorceress to back them up. 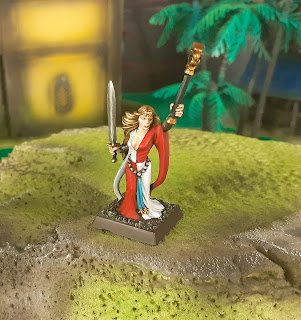 The sorceress model was always a very good sculpt, and it's nice to say that time hasn't been terrible for her. For the army, I wanted to capture a bit of the crazed mult-tone that characterized old Bretonnia so they have a few different colours, but yellow, blue and red feature quite prominently. I painted the knights with their own heraldry each.

I also had a go at photographing a battle scene for them with a few skeletons that were marauding nearby. I just hope that isn't a Vampire Lord at the back, or those knights are toast... 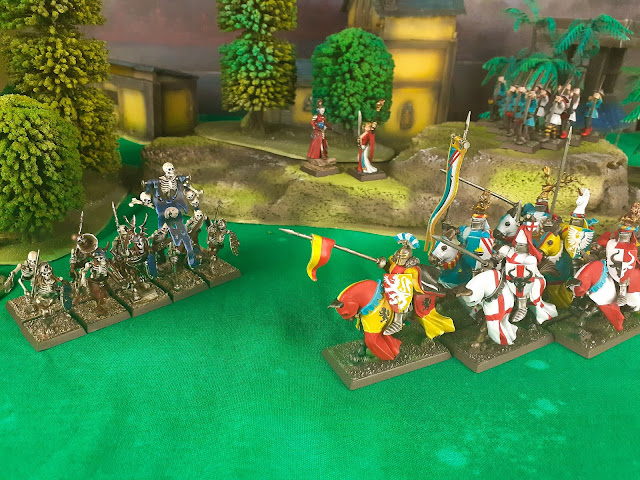 Actually, I didn't have a general model, so I had to convert one (seen at the front of the lance formation) by using a knight and adding a cape and head swap. He came out pretty good in the end. The whole force is pictured below - complete with 10 archers. 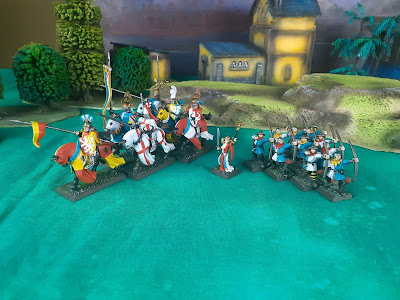 This project is now complete - I basically just ran out of models to be honest! I do have some more knights and archers, but I never collected Bretonnia at the time and getting any of the metals now is just painfully expensive. I actually finished this force before the Lizardmen, and I have plenty more of them to be getting on with (Including a Stegadon for Monster March ... hopefully)
Speaking of Lizardmen, am I the only one that thought that was an odd pairing - they're basically from other sides of the old world and have very little possible reason to ever cross paths. Here's one more classic-style battle photo for the road -
Posted by Blazmo at 21:30:00
Email ThisBlogThis!Share to TwitterShare to FacebookShare to Pinterest
Labels: Army Showcase, Bretonnia, Fantasy, Oldhammer