Continuing with me fantasy theme, here's another small army that I've been working on recently. Unlike the other projects, the dark elf force uses mostly modern models although I have been using a metal executioner champion as the general. I'm working on some cold one knights and a mounted general to go with them for when I next expand the force.

The army is shown below as it stands so far: 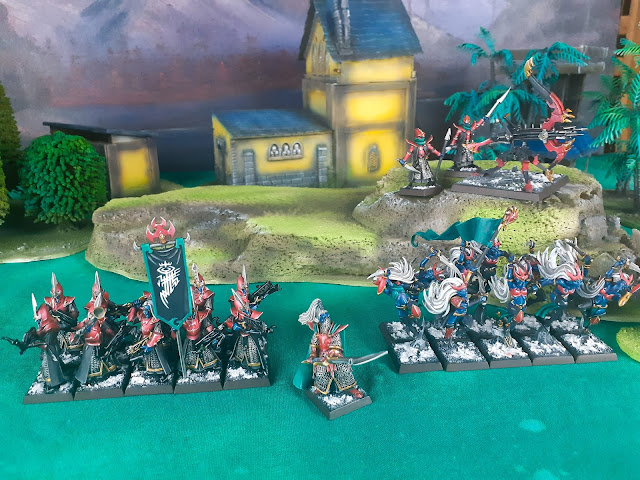 I found it really hard to find good painted examples of dark elves on the internet. Nobody seemed to be doing what I was thinking, and to be honest, I got the impression from looking around that they weren't that popular and got rather shafted in the switch to Age of Sigmar. That said, the Daughters of Khaine range is rather nice.

Probably the stand-out parts of the scheme are the metallic red armour which was achieved with Vallejo Mecha Red. The other thing that's a bit different is the dark blue skin tone. I've always liked drow and thought it might be interesting to do something similar with my dark elves. I didn't want to go pure black with the skin as it wouldn't have combined as well with the other colours I had envisaged for the scheme. As often happens these days, I had a look through my paints and found a pot of Kantor Blue which looked perfect as a base colour for the job. 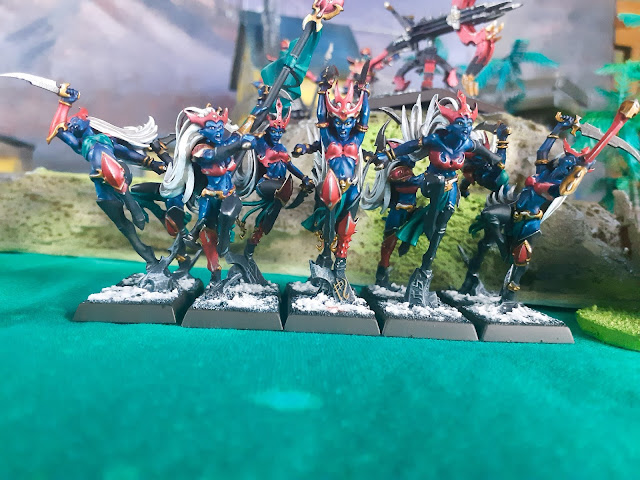 As with my other armies, I've been preparing these for 5th Edition. I did play against Dark Elves a few times back then, but I never really knew anything about their background. I got hold of an old Armies book, and I've been enjoying reading about them and especially their seafaring background. There was also this whole bit about a big underground sea that I'd never heard of that I thought was very cool. It's also funny how they didn't seem to pull their punches in terms of what was deemed acceptable back then. There's whole passages in that book basically describing how the dark elves like nothing better than taking as meany slaves as they can, tearing out their still beating hearts, eating their flesh and then stripping off and getting busy amongst their bloody remains. It's a little weird that most of them are now "Cities of Sigmar" armies.

Repeater crossbows (above) are pretty cool weapons too. I did a bit of conversion with a few of the poses as they come posed to lock into ranks and don't aim by default. I also did a little sculpting and added an eyepatch to their leader for the pirate factor - "argghhh!" 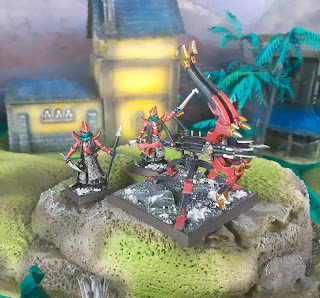 Also, a repeater bolt thrower was definitely necessary. Despite playing fantasy for many years in my youth, it's actually my first ever war machine! I played Lizardmen and Vampire Counts back in the day so never had access to a cannon or anything of that type. Alongside the modern plastics, I've been gathering a few metal 6th edition models for the force and this Bolt Thrower is one of them. It's a cool design and is by far my favourite both thrower model for fantasy. 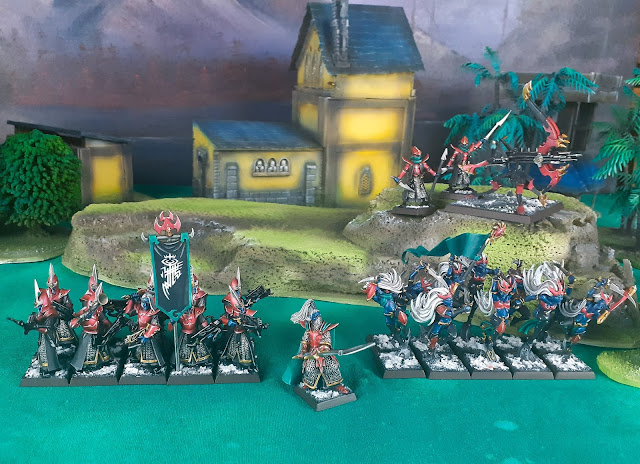 Well, that's about it on this army for now. I do have a lot more models to add and have started on their dragon for Monster March. I don't really need a dragon as there's no way to even fit it into a force until you hit about 2000 points, but the models is just really cool and I couldn't resist! To be honest, I bought way too much stuff for them, but what do you do with yourself when you basically haven't left home for a whole year?
Posted by Blazmo at 09:30:00
Email ThisBlogThis!Share to TwitterShare to FacebookShare to Pinterest
Labels: Army Showcase, Dark Elves, Fantasy, Finished Work, infantry