One man, one model, one mission ... oh, and one now rather empty wallet. It must be Salute 2017 then. I entered the painting competition again this year too, but more on that later. I figure that the best way to start is with a big exciting shot:


This picture shows just one part of an amazing 30k display put together by the South London Warlords themselves. There was an awesome array of Heresy stuff on show, and I had the opportunity to get rather close to this lovely Warlord Titan. I don't envy the guy who had to paint it though as that thing was pretty big! 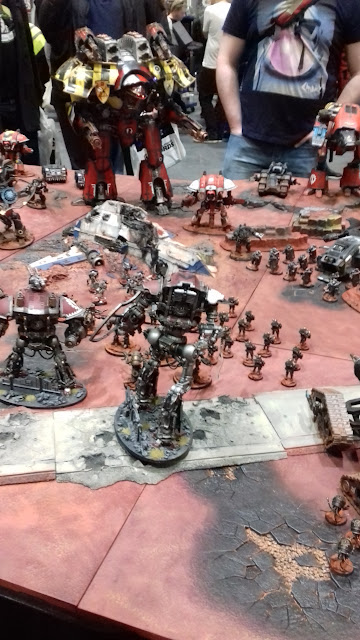 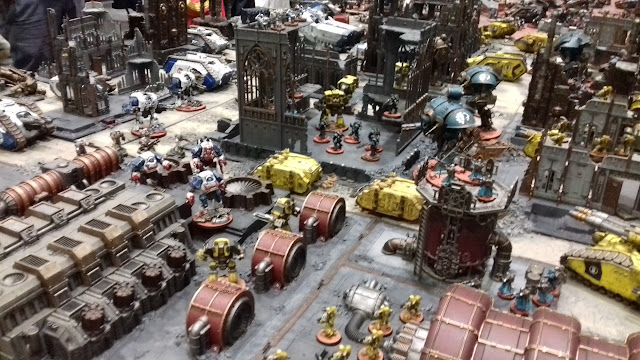 Just for fun, I'm going to feature interesting facts under the title of "Top Secret Info" throughout this article. These are all things that I discovered on the day by chatting to people about what was going on, so hopefully even if you read other articles on Salute, you'll still learn something!

Top Secret Info: The Titan has light up LED lights on its head; fairly obvious from a lot of pictures. I got to talking so some of the guys though and apparently, it also has a working War Horn - with speakers mounted in the head. Rumour has it that it's quite loud too (although apparently not loud enough to penetrate the heaving dirge of Salute's crowds!)

There were also a lot of display games going on. I particularly enjoyed this Infinity game. that featured a very cool set-up with a huge Mag-Lev Train arrayed as the central piece for the scenario. 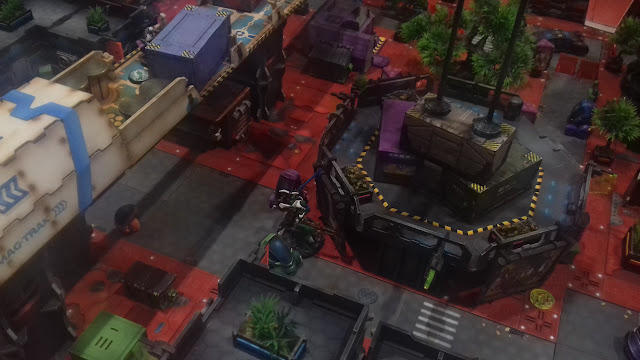 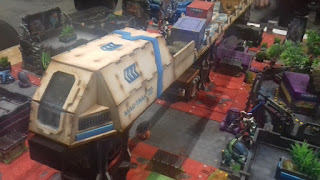 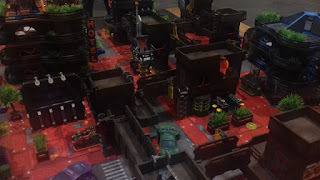 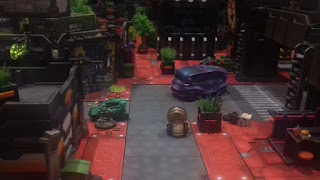 Top Secret Info: The train is made by TT Combat (Troll Trader) and is available from their website. Its track was actually a plastic piece of insulating conduct junk (whatever that plastic box stuff is called they put over wires in offices!)

Needless to say, I had to drop by Anvil Industry: 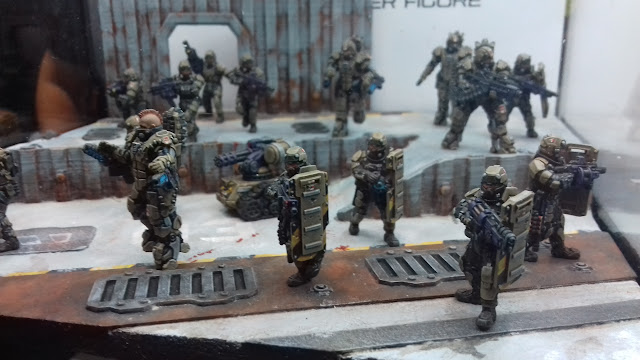 Interesting stuff from Anvil this year. They had a full display set up with some really well done Afterlife miniatures on show. They also had the full Regiments/Trench Fighters Range with them (my personal favourite) as well as a demo game going on; on the bonnet of a converted Land Rover! (no really a full size vehicle with a turret and everything). That one in particular seemed to be a great hit with the kids.
Being the generous guy that I am, I took the opportunity to give them a gift; namely the 5 men that﻿ I had painted for the Trench Fighters review (see the review here). I know people will think I've gone mad, but they weren't really for an army I collect and were just going to sit in my display case gathering dust, and I figured the guys at Anvil might appreciate them. They were very well received!
If you head over to facebook, you'll see my original pictures heading up their facebook page. What a vote of confidence for the blog!
Top Secret Info: According to the Anvil team, they weren't expecting to make any money from Salute as they already spent all of the profit on their shiny new stand and display! Also, the super secret part was they they're thinking of opening an actual physical store at some point in the future. Good luck guys!

I also had the pleasure of entering Eavier Metal's Speed painting event. The goal? Paint a zombie in 25 minutes. Here's a picture of two of the finest entries around... 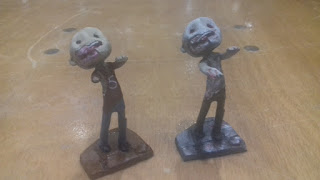 I'll be honest, both painting and photography could be better (not to mention sculpting - where did these things come from?). The interesting part was that it gave me a chance to try out Army Painter's range paint range. It turns out that they're rather interesting - with a notably long drying time and an almost oil-based type feel. They do dry rather smooth though and the pigment is good. I might have to buy some in the future to experiment with as they are a whole different thing compared to GW and Vallejo, and really feel like paints designed to wet-blend with.

The speed painting was great fun, and was a real highlight of the day. The perfect way to rest your weary feet after a few hours of shopping, and to test your skill a bit too. Also, the running commentary was pretty funny, and certainly made it a memorable experience. Fun for all ages.

Top Secret Info: The Eavier Metal Guys host their own painting competition called "Eadbanger III". I'm assuming that means that this is their 3rd year or something...

I also got to have a go at painting one of the zombies from Mantic's new game based on The Walking Dead. These were much nicer miniatures, and with no time limit it was a great chance to relax later on in the day. I got to keep both of the miniatures that I painted for these events too, so that was a big plus-point.


There was also the big painting competition going on. I took my entry down and got her in the case early on. Unfortunately the picture quality isn't that great through several inches of hardened super glass (also known as a cabinet door). 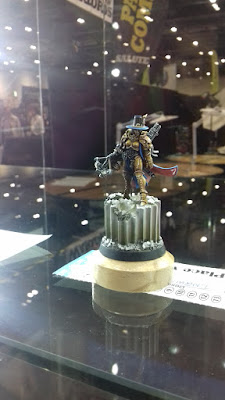 I've taken some better pictures at home which I'll feature in a separate post, as I don't want to clutter everything up here with them. I was very happy with the end result.

Unfortunately, I didn't place in the end, but I never really expected to. Interestingly, it became all the more clear why when I looked at the judging categories for the first time; with points given for emotional impact and other things that I never even considered. I normally just go for badass or "look at my shiny new bolter", so that was a bit of an eye-opener.

Next year it'll be a crying mime on a dragon then!

Not content with just good prices, some stores also gave goodie bags to the first customers (limited numbers). In addition to the bag I got on my way in, I was treated to an extra bag of goodness from Troll Trader after spending over £30 in their store on scenery (more on that later because the deals were literally jaw dropping). This list isn't exhaustive, but it gives you a taste of some of the things on offer. Don't forget about the 2 free zombies I got earlier either!

In the Salute Bag, I got a figure for Freebooter's Fate, which actually looks like a pretty well-detailed plastic piece and the Salute 2017 figure, which looks like a horrible metal mess with a flag (so about the same as every year then! It really is one of those rare models that could be improved through the use of high-yield explosives). I can't complain though as it was free and like I said, the Freebooter's Fate one does look pretty nice.

In the bonus TT bag, I got a free set of resin miniatures (one from their new game Rumble Slam - a miniature fantasy wrestling game, and some bonus promotional bits), the rulebook for Deadzone, and a pre-coloured card building, which is always nice.

Well, that about sums it up for now. I'll be back later with a post about the miniature I entered in the painting competition and some more on what I bought on the day. Until later then...