How's that for an update!

Thankfully, I finally got to the stage where I could start putting her together. I did a bit more airbrush work over the Christmas Holiday - mainly painting up the hair, the base, and the capes/flames. It was a big batch of stuff to do that took a lot of coats of paint in the end. I was a bit undecided whether to start sticking her together, but after a bit of indecision I decided to just go for it - with the thought that either way it was going to be hard to paint up the remaining details. The one part that was a real struggle was the shoulder armour, as I had to paint the whole thing assembled and she is getting rather spindly and difficult to handle at this point. It was pretty funny to work on though as I was painting her at the same time as my brother was working on his Bio Titan (see my Christmas Post for more on that one) and we were both at weird angles trying to paint round corners. It was like a lesson in how to paint unsteadily with bad posture. 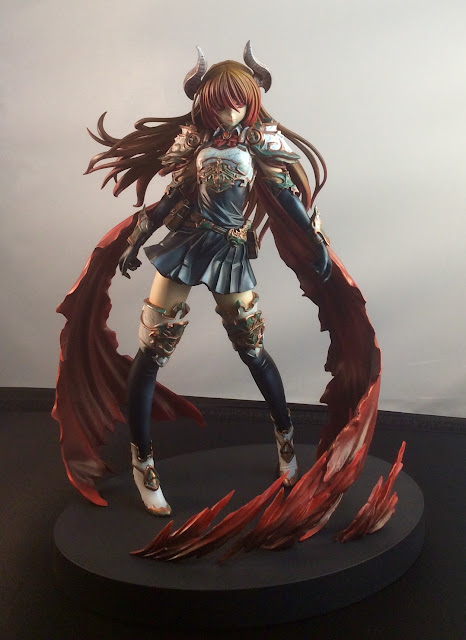 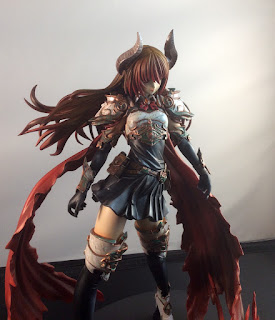 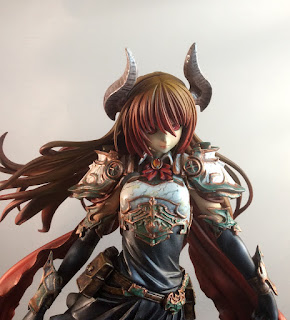 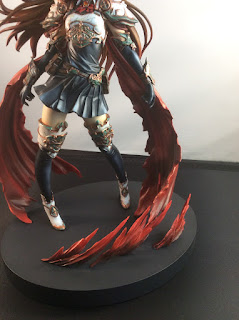 Oddly, one of the other things I had difficulty with was the base. Not because of the detail so much as it was that the thing is so smooth and large that the colour had to be applied really evenly as any uneven bits looked absolutely terrible. I tried to varnish the thing at first, but it didn't work and came out really blotchy. I ended up going over it with a few coats of dark grey with the airbrush to even things out again. It seems strange, but it really was unlike painting anything I've ever had the need to do for 40k or any game system.

At the moment, I'm thinking that the Red looks a little too strong, but I think a lot of it will be blocked when I get her weapons on. They'll also be a source of a lot of black and marble colours, so it'll reinforce the look of the whole thing and strengthen up the scheme a bit. Likewise, I was a bit unsure of what colour to do her hair when I started working on it, but after about a dozen coats of various browns, I settled on something that had a bit of red to it as well as some lighter tones. I didn't want to make it too stark and risk overshadowing the whole piece. 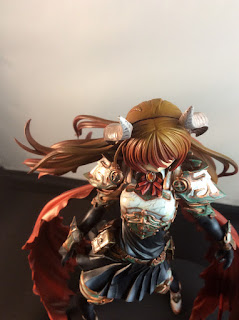 The other thing I need to work on is the gap between her two hair sections. At this stage, I think the best thing to do will probably be to fill it and then paint it in by hand. I have no idea how I'll get a colour match though! I think it'll be a job for a lot of layers of thin paint to get a smooth blend, although maybe I'll be able to sculpt some detail into the gap that'll help it mesh. I guess we'll see. I also need to finish painting the horns.

Well, that about sums up the progress for the minute. I'm happy so far, but this is turning into a real project and there's still a long way to go till the finish line. I reckon one or two more posts to go till the end (like maybe one per lance, and a final roundup). It's a strange thing though - I feel like I'm looking at someone else's hobby from the outside and it can be surprising what a steep learning curve it causes. Then again, that was kind of the point at the outset; so I'm calling it mission accomplished so far.
Posted by Blazmo at 09:00:00
Email ThisBlogThis!Share to TwitterShare to FacebookShare to Pinterest
Labels: Anime Figure, Garage Kit, Japan, WIP