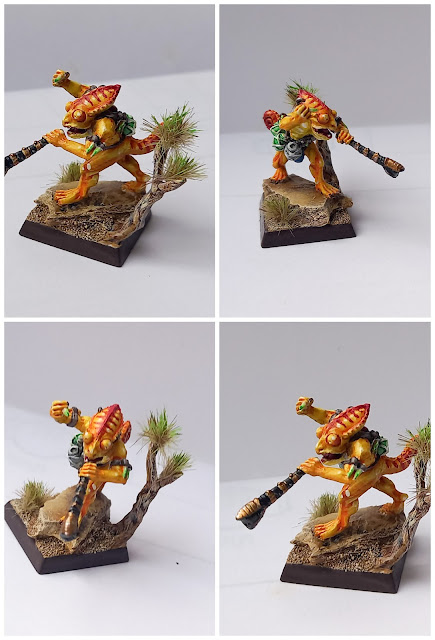 A classic model I've been painting since last night. Finished him this morning and thought I'd post him on the blog as I've been neglecting to post much lately... again.

Lizardmen were my first ever Warhammer army. Back then I couldn't afford the armies book at first and I remember leafing through it in my local games store and coming across the art for this guy and being blown away! Immediately I wanted one, but there was no model, so I set to work on a series of terrible conversions with old plastic skinks as the base - then dutifully painted them up in garish colours inspired by Buzizima the Chameleon from the PS1 classic fighting game Bloody Roar 2. Thankfully, some years later, the actual model came out and I bought him.

As an old sculpt, he stands the test of time very well - I like him a lot more than the other iterations of chameleon skinks that came out later. Actually, I consider pretty much everything done to the Lizardman range after 5th edition to be pretty heinous to be honest, but that's probably a story for another time.

For a bit of fun, I used a coat of Vallejo transparent orange on his skin over a white undercoat which interestingly worked a bit like a contrast paint in terms of making a nice vibrant base. The little tree on his base was a bit of an experiment too, and is made of wire twisted together and coated with milliput.

That about rounds it out on this guy. Interestingly, he seems to be worth about £40 at the moment on eBay - possibly attributable to Warhammer Total War, but as I've never played it I can't say. Either way, if you have a spare one, you're sitting on a small fortune!