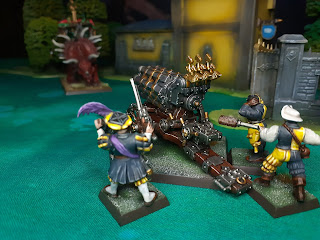 Just a quick post today to share a few pictures of this Empire Helblaster that I've painted up. I started working on this thing just after finishing the Skaven force that I shared last week. This is actually a more modern model and is the current plastic edition of the gun. I've painted it in black and yellow, which is the colours for Averland. I wanted a punchy scheme that was going to be relatively easy to apply. 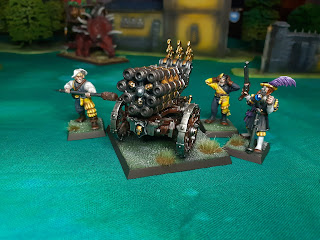 Despite just painting a bunch of Skaven in yellow and black, these guys are painted in the reverse order - with the black areas applied first and then the yellows layered on top. With more black than yellow to get through, it just made sense. I've always had a soft spot for Helblasters ever since I was young and used to stare at the pictures in the old 5th Edition Battle Book for endless hours.
It has been a great source of amusement that for some reason, one of the crewmen came out with more than a slight resemblance to Owen Wilson. Maybe it's just the way the hair is painted, but I now know the perfect head if someone wants to recreated Shanghai Noon in a tabletop game!
That about rounds it out for this one. I have some really ancient Battle Masters Empire sculpts that my brother recently gave to me that will be forming the backbone of the force. They're old single-pose models from a pre-historic time. I'll be interested to see how decent or not I can make them look with a proper paint job.
Posted by Blazmo at 08:23:00
Email ThisBlogThis!Share to TwitterShare to FacebookShare to Pinterest
Labels: Averland, Empire, Fantasy, Finished Work