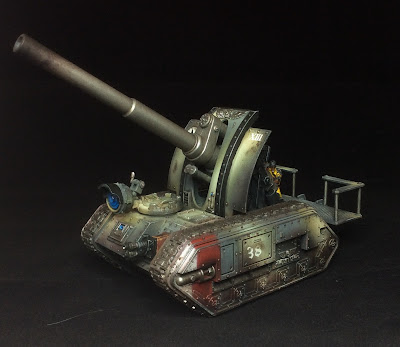 There's just something about the Basilisk that really speaks to me; maybe it all started years ago when I used to stare at pictures of them in White Dwarf as a kid. Regardless of where it started, I've always had a fascination with the tank, so I knew it was something I wanted to add to my Steel Legion force as soon as possible.

I know that they make an Armageddon Pattern Basilisk, specially for the Steel Legion, but I've never liked the closed crew compartment. Speaking of crew, I plan to paint up some more soon to stand on the back, as a Basilisk just never looks quite right without them. And that one guy is looking a bit lonely. 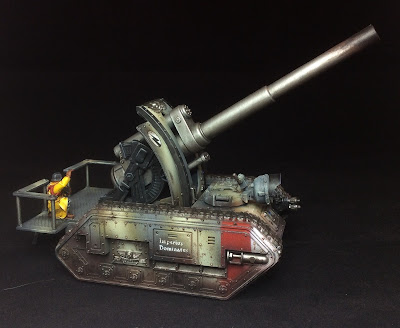 For this model, I followed the same scheme that I used to paint my Deathstrike the other month. I wrote it all out in a full tutorial, which I'll add a link to for anyone interested:

To round out the artillery, I also have a Colossus that I partially batched with this Basilisk. I'm not rushing to finish it as I think it'll be a little too powerful for the 500 point games that I'm planning to start with. I have to say that with these tanks, I've really been enjoying the weathering process, and it has been fun to be able to get some nice results pretty quickly. 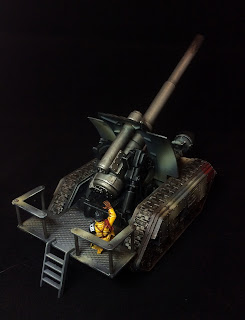 The only thing I don't like about the Basilisk kit is the strange hole that seems to be left in the back. Someone tell me if I'm wrong, but I couldn't find a thing in the instructions either time I've built one, and I ended up rigging up a fix with an armour panel and a few spares. It really doesn't show and was easy enough to do, but I can't help feel like you shouldn't have to do it anyway!

So, that's another tank down for my burgeoning force; bringing the total to 32 infantry, 3 sentinels, and 2 tanks. On the painting block currently, I have the aforementioned Colossus, an Artemia Pattern Hellhound and the crowning jewel of the planned 1000 points; A Malcador!