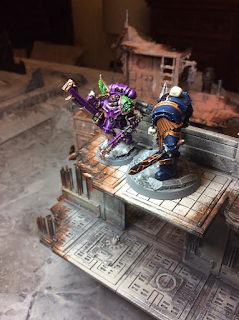 Well, the blog has continued to grow over the last few months. It seems that the more posts I create, the more a steady flow of traffic is beginning to form and so far things are looking good. I recently hit the benchmark of 20,000 hits (although I'm already at a few thousand more), which seems like a milestone that reflects a modicum of success for this place. I'm at 300 over comments too, so keep 'em coming.

I think it's no secret that I don't particularly go out of my way to advertise this blog; mostly because I simply don't have the time or inclination to do so, and it takes as much time as I have just to keep it ticking over. I think probably because of that I'm indebted more than others to the community of bloggers who help support this site as well as my faithful followers, so I'd like to give a big thank you to anyone who's a regular reader, commenter, or fellow blogger.

In other good news, I played the first games in my new Genestealer Cult Vs Skitarii campaign over the weekend and I've started the somewhat painstaking task of writing them up. It was a really good time though, so I think they'll be nice little reports when they're done (hopefully some time later this week).

As if that wasn't enough good news, I'm looking forward to that new "Traitor Legions" codex. Here's hoping Chaos will suck a bit less in the near future! My Emperor's Children hunger for better rules!