Some of the finished units from my converted Traitor Guard force. There are 20 men in total and the process of converting all of those metal Vostroyans was more than a little bit painful!

Conversion wise, I've basically head-swapped or de-bearskinned every single one of them, well except for the big guy with the Autocannon who is converted from some old Chaos Warrior and Ork bits. They were a lot of work compared to using plastic Cadians or something, but I like the look I got in the end, although some Imperial Symbols do remain - I guess they're newly turncoat!

The pictures below are from the second squad. One of the things I love about playing Guard is how expendable your men are. At 5pts each they can actually be called successful just by taking bullets for your more costly units. They are actually reasonably survivable too for their points range. The 5+ save isn't too bad and if you get them behind a nice wall they'll stay in the fight long after they deserve to be dead.

Probably the best part is the system of Orders they have these days - getting 3 shots a man can really get some mileage out of your lasguns - remember if the squad can kill about 3 or 4 marines they get their points cost back. The sheer number of shots is also good for my legendary bad luck! 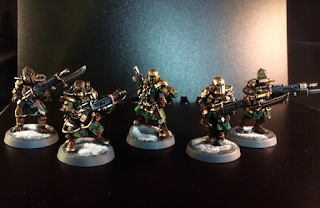