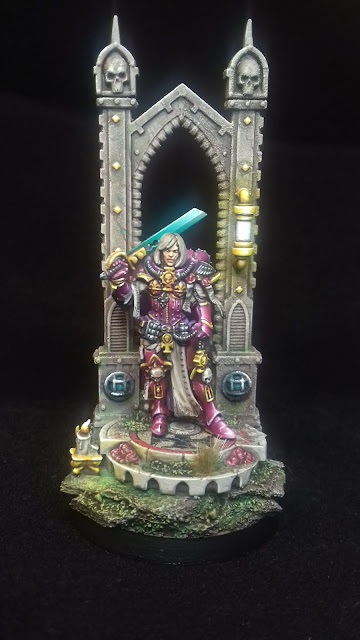 I'm entering the Everchosen painting competition today, so I thought I should post my work on the blog too. It's been a while since I last posted on here, but I have been working on some miniatures, so with any luck, more posts should be coming soon.

This was a cool model to work on. I wanted to do something for the competition, but was undecided about which model to use. I've always liked sisters of battle (and have an old army of the metal ones at home too), so I knew I was going to pick up the first ever plastic one when she came out. Given the timing, I figured that she would make a good entry for the competition too. I also often end up painting female models for competitions. I think it's because I spend so much time painting burly dudes that by the time I get to picking something "just for fun" I'm in the mood to switch it up a bit. 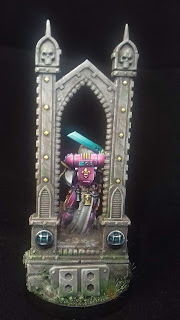 Build-wise, I made a few changes. I took away her bolter and added a sword from a Mechanicus infiltrator. Mostly to make her look more interesting for the competition, but it is a cool part and it wasn't that hard to do. Other than that, I added the archway. After painting, I added some "broken glass" to the arch too (seen at the bottom from the back). There are a few bits scattered on the floor too, but they aren't that obvious and don't really jump out in photos. Nevertheless, I think of it as a bit of an "Easter egg" for anyone who bothers to look at her long enough. The arch is the side struts from one of the citadel building kits, just cut to shape and re-joined at the top and bottom. 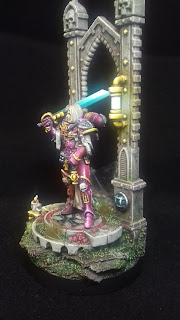 As far as paint is concerned, I went full NMM. I'm honestly not the best at non-metallic metals, but that's pretty much why I did it. I always try to push myself with competition entries, so it was an obvious choice. I laid down the base colours and blends on her armour and sword with the airbrush, but after that it was all good old-fashioned brush work. I also added some fairly subtle OSL in the form of the candle and lamp. I'm quite happy with the candle, but I feel like I could've brought the effect through to the actual model better. It doesn't really matter though as I'm happy enough with it as a bit of throw-away wow-factor. 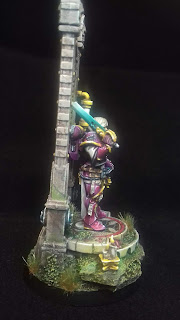 That probably just about rounds it up. Everchosen is decided by public vote, so who knows how this thing could swing. I'm sure I'm  not in with a look-in for the grand prize as the really serious painters are sure to be out in force. A local victory would be cool, so I could at least make it to the online voting stage, but I guess we'll see. 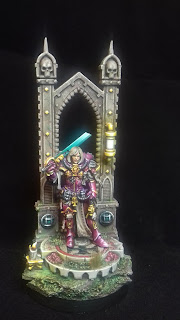