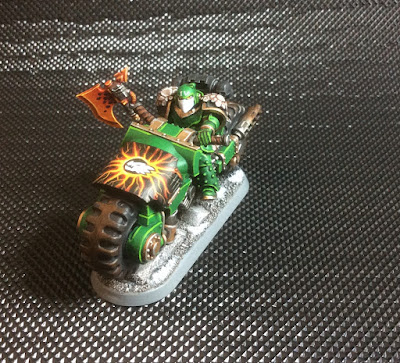 My fast attack army needed a suitable leader - one who could roar across the battlefield waving his mighty axe high. The only hitch is that GW don't actually make a cool character on a bike; nobody has a cool custom steed that would stand out in an army that is mostly on bikes. I also wanted a Librarian as I honestly think they're a really good choice for the points value you pay (although I painted him in green rather than the standard blue for the Librarius as it just looked a lot better).

The bike itself is made from a large variety of bits - chunky Gorkamorka wheels, combined with the bottom of a forgefiend's head and an old Ork bike chassis!

I made the rider out of a Sons of Horus Reaver body with a Chaos Chosen's power axe (that I removed the Chaos symbols from). The Corvus helm really helps give him an old school Rogue Trader type of look. The choice of parts mean that I could probably use him in Heresy, although he is for my 40k army.

The salamander scale pelt is greenstuff. I created it the same way I did on all of my Salamanders; which is to say that I cheated. I took a piece of instant mold and cast the side of an old Lizard Man Cold One. I then cast sections of scaly flesh and just sculpted the edges and adjusted the details as I went.

As far as paint is concerned I painted him the same as the rest of my Salamanders, but I opted for some freehand on the top of the bike.

For those who missed my last Salamanders post, some pictures of the rest of his squad are available here: Salamanders Bike Squad. 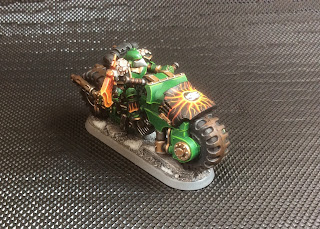 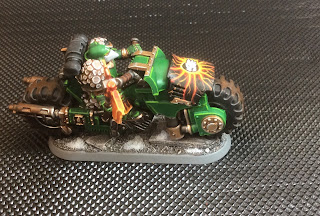 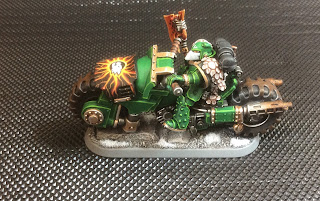