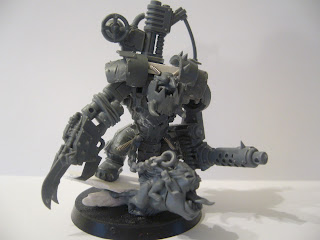 I wanted some Mega-Nobz for my all grot army, but I didn't want to spend a lot of money. Luckily at the time it wasn't long since the release of the Sanctus Reach box set, so I had a lot of Ork sprues lying around the place. I suppose Mega-Grots would be the correct term for these guys.


It turns out with a bit of elbow grease and some spare parts it is easy to make some fairly convincing Mega-Nobz using the regular Nobz box. The best part is that you get so many of them - I built a unit of 4 to accompany Makari into battle (see earlier post - Waaagh Makari if you're unsure what that means). I still need to up armour the legs to make them look a bit more mechanical and fill a few gaps, but I'm happy with the way they look so far. One day I'll have to paint them too .... and don't even get me started on the Battlewagon they ride around in! 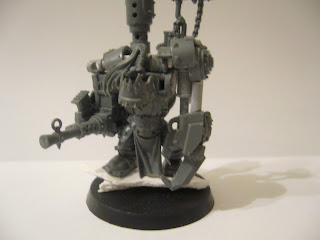 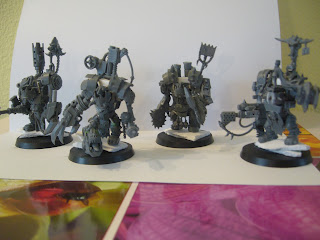 The trick to building these guys was to glue the body and legs together and then add a thick piece of Plastic/card across the top of their shoulders (those big white blocks you can see in the pictures. I then added the arms and put on double-layered shoulder pads to make the torsos really big. After that it's really just armouring the rest of them up with spare parts and getting some power generator type things on their backs. Scale wise they're actually quite a bit bigger than Space Marine Terminators, so everything worked out well.


I'd honestly recommend building Mega-Nobz like this to any Ork player with decent conversion skills as the GW ones are a bit of a rip-off! It does help if you've built some Killa Kanz recently too as the spares from them came in very handy on these guys - plenty of armour plates and glyphs. The only real difference would be how you put the arms together as mine are basically Power Klaw parts mashed into spare gun bits for a mechanical look, but I'm sure you'd figure something out.
Posted by Blazmo at 08:48:00
Email ThisBlogThis!Share to TwitterShare to FacebookShare to Pinterest
Labels: 40k, Budget Wargaming, Conversion, Games Workshop, Gretchin, Grots, infantry, Makari, Ork, Terminators, Waaagh Makari, WIP