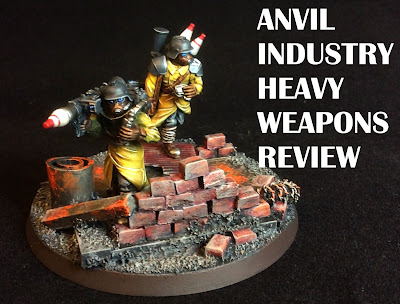 I'm back with a fresh review for another excellent Anvil product.

This time, I'm looking at the modular Heavy Weapons sets. These sets are 28mm scale and are compatible with the full Regiments and Trench Fighters ranges. Like other Anvil products, they're scaled to fit any of the major 28mm scale companies, so they'd be right at home being manned by a few Cadians, or any other GW forces. You could probably make some great Ork Big Gunz with them too, with a few Gretchin crew to man them.

These miniatures were supplied by Anvil Industry free of charge in exchange for the review, and they even let me pick the parts this time. I wanted to use them in my Traitor Guard force when they were finished, so I picked a selection of cool bits. For some reason, I was really drawn to the idea of having some Mortar teams, so here's hoping they'll be reasonable on the field! 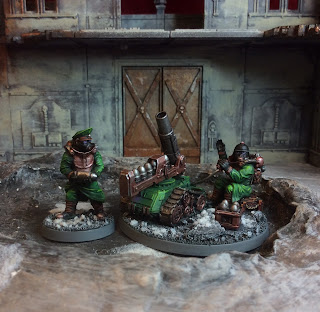 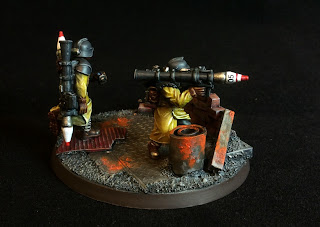 I also got some man portable RPG launchers, as I wanted to show both the larger set weapons and the smaller man portable types. Handily, I also have a Steel Legion force that I've been working on, so I put together a rather nice rocket team so I could show them in a different style. These weapons can be mounted as simple two man teams, or combined on a larger base to make a more dramatic display like mine, which I've based to match the ruined industrial look of the rest of the force.

Like all of Anvils products these parts are made of resin. The resin is very clean and has incredibly fine detail. I always say it, but the crisp details are second to none, and really put a lot of other manufacturers to shame. Personally, I'm often a bit dubious of resin miniatures as they can be a really mixed bag, but as before, Anvil delivers a quality that most other companies can only aspire to. These parts were supplied for the review, but I've bought from them myself in separate orders and the quality is always excellent. I know a lot of other happy customers of theirs too, and I've never heard a bad thing about them.

As with all of the Anvil products I've seen the casting is flawless. I didn't have a single fudged detail or imperfection in 3 complete heavy weapons teams or any of the Regiments squads that I've ordered from them before. There aren't a lot of mould lines either and the parts are very easy to clean up; with most just needing to be clipped off of the sprue and glued together.

Everything fits well, and I didn't have anything that was bent or needed to be reheated and bent to fit. It you're not familiar with resin, this can sometimes be a problem, even with big manufacturers like Forgeworld. The upside is that it is usually fairly easy to fix by submerging parts in very hot water for a few seconds and then bending them back where they are supposed to be. I've never seen it with Anvil products, but it is worth knowing for future reference.

The joints don't need a lot of gap fill either; only if you're converting, and getting a good pose for your miniatures is easy to achieve. 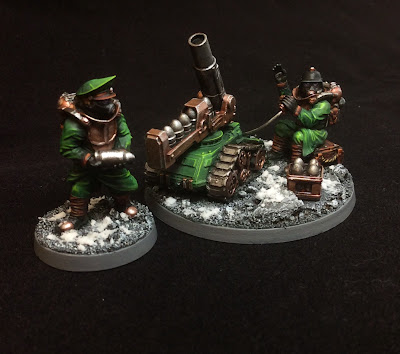 Heavy Weapons
With the basics out of the way, lets take a closer look at the actual Heavy Weapons.

The sets are modular in that they come with a choice of weapon and a choice of stand/mount.  Currently there are several options for both, and I'll include a few stock photos below to give you a overview of some of the range. You can also get optional extras like ballistic shields as well as items for the crew. 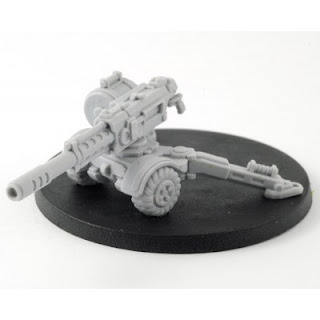 For my part, I chose to go with some rather nice mortars and tracked units. I have a sort of traitor tech guard force, so I wanted them to match the look I had on my other units. The tracked bits are really cool, and the detail on the small inner wheels are really crisp.


For the rocket launcher team, I built a scenic base with a bit of wall for them to hide behind. I had a bit of a play with the parts that I got to make them look like they were on the move and receiving orders or something. You can made a variety of poses with the parts offered in the set; including aiming and firing poses. They combine quite well with the crouching legs as well to really make that classic shooting pose for a shoulder mounted weapon.

For those interested in the exact bits on show in this review, here's the list of everything I received:


Regiments Custom Heavy Weapons Squad (6 Figures)
- Regiments Head Style: Stahlhelm Gasmask
- Regiments Torso Style: Gothic Void Torso
- Regiments Legs: Long Greatcoat
- Regiments Leg posing: 2x Kneeling, 1x Sitting
- Regiments Arms: Fatigues
- Regiments Infantry Weapon: Tesla Disintegrator
- Regiments Shoulder Pads (optional): Double Curve
- Regiments Heavy Weapon: Mortar
- Regiments Gun Mount: Tractor
- Optional Gun Shield: Tech
- Regiments Arms: Fatigues
- RPG Launchers (three launchers with arms)
As with the other sets that Anvil make, the pieces have a huge amount of customisability; with a number of different torsos, legs, arms and heads on offer. Combined in with the heavy weapon teams, you really can make almost anything you can dream up. They've even done a range of dress uniforms and Private Military Contractor style parts lately, so the range is bigger than ever. A quick search on the internet, and you'll be able to pull up plenty of images of some of the other looks you can create, or even better, you can go to their online store and have a dig through the parts on offer. 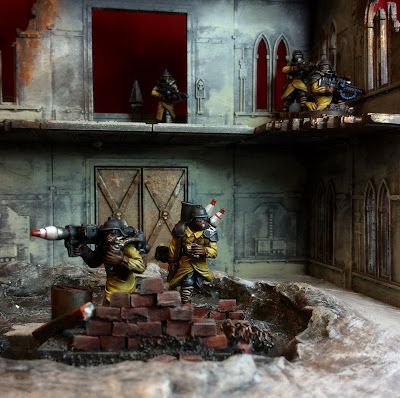 I've said it before, but you really can't beat Anvil in terms of resin quality and casting. After that, it only really comes down to style choices and preferences. Handily, They've got you covered there with a huge range of parts available in all kinds of styles that allow you to create an infantry regiment of almost any type you can imagine. The heavy weapons are just another facet in this great range, and Anvil offer enough bits for you to really go to town and build something cool and unique. For me, a great bonus is the ease of build. Resin can be hard to work with, and the idea of putting together a whole platoon from some sellers would be more than a little daunting, but with Anvil it really is easy; with no more time needed than putting together a unit of plastic figures. 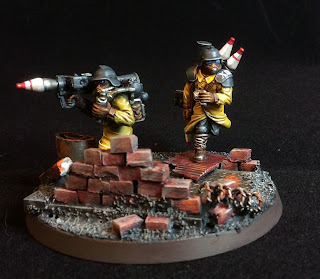 For most people, these kits are going to go straight into an Imperial Guard/Astra Militarum force, and this is where the heavy weapons kits can really shine. There are enough parts on offer to match all of the older regiments; like Mordian Iron Guard, Catachan, Valhalla, Pratorian, Tallarns or my own Steel Legion. This is really great, as it offers you a chance to get modern quality parts for your force that may never have been made, or be very scarce now when the original models were released back in the 90s. Equally, they're suitable for a range of conversions, and would be right at home in a range of other games and systems that use a 28mm scale. That's before you start considering things like Scions or Veteran Squads, which are perfect excuses to pick up some Anvil parts.

I guess the biggest endorsement I can give them is that I'm planning on ordering some more parts soon, so I can build another unit of men, and another rocket team!