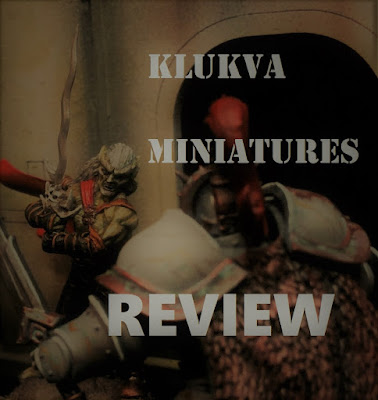 Occasionally, when surfing the internet, I come across a miniature that I really can't live without. Recently on my travels, I happened to stumble upon Klukva Miniatures; a small Russian company that make resin figures that are mostly inspired by various fictional characters. Mostly these are video game characters.

While browsing the site, I came across their "Bloody Vampire" and "Soul Vampire". Also known as Kain and Raziel from the Legacy of Kain series. If you missed out on playing Soul Reaver back in about 2000, then you missed out on the best video game ever made. It's no exaggeration to say that it was not only ground-breaking at the time in terms of mechanics and scope, but that it actually hasn't been equalled since. Sure, graphics may have moved on, but I've never felt as absorbed in a storyline or attached to the characters as I was to that game (or the series that followed. Or even later when I played the PS1 classic Blood Omen that had come before).

Anyway, fast forward about 18 years, and I can finally live my childhood dream of having Kain and Raziel in miniature form, thanks to Klukva miniatures. I hit the "buy" button pretty quick when I saw them there!

The Review:
As they're a fairly new company, I thought a quick review might be in order. I'm going to hit the main points, and try to answer those basic questions that we all wonder about when ordering from a new company.

Resin Quality:
I have to admit that I wasn't sure what would turn up on my doorstep, as you never really know whether the pictures you see will be representative of the actual quality of the final product. I didn't contact Klukva before ordering or anything like that, so the product I received isn't hand picked to be good for a review; this is exactly what turns up.

Anyway, the quality of the resin is really nice. The detail is good and the mould lines and flash were minimal. What I got really looks exactly like what I saw on the website, which was really nice to see. I only have a few figures for comparison from them, but there were no flaws or air bubbles on them and the whole building process and clean-up was pretty easy. Overall, I'd say I'm really impressed with the quality. They're definitely on the higher end of the scale as far as resin casting is concerned.

If you haven't had a lot of resin figures in the past, you may not know that it can be a real minefield and quality really was my biggest concern going into this.

Ordering and Delivery:
The ordering process is pretty easy, they have their own website (available in English). Basically the same as most online stores these days where you add things to a cart and then head over to the checkout. You get email updates from the store when things are being packed and shipped too, so it's all pretty civilised.

International post costs a flat 5 euros, which is pretty reasonable.

After I placed my order, there was a bit of a delay before the miniatures were cast and posted out. I then had to wait for the Russian postal system, which seems to take up to a month to the UK. In general though, given the type of miniatures that they make, I didn't think it was bad. I knew that it would take a while, and as these were just fun purchases, I wasn't in a particular rush. It is something to consider though, especially if you have a particular time frame in mind for a project.

One thing that I was really impressed with is that the miniatures arrived in a plastic postal bag as you might expect, but inside that bag was a laser-cut MDF box that housed all the models; protecting them really well in transit. I think I'm going to have to keep it to use as scenery or something as it is way too nice to throw away!

Price:
Well, I think the prices are pretty reasonable for what they are, which is basically individual resin characters. At the time of ordering, the Bloody Vampire and Soul Vampire were 9 euros each which feels pretty thrifty for something so specialised. 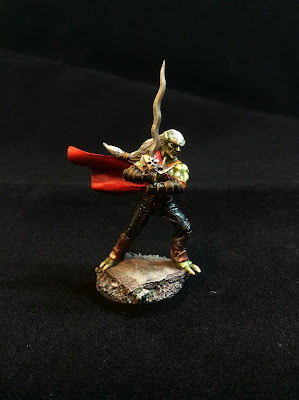 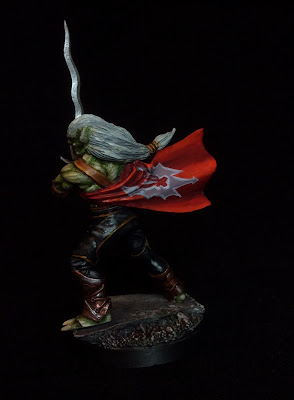 Painting:
You might have noticed that some resin is really greasy and can resist paint. That wasn't the case here though and they were both really clean; with minimal work needed in that department.

I really enjoyed the painting process. Not only are they great miniatures, but I had a lot of fun working on something different. It was also interesting to try to match the colour schemes of the models to the original concept art and in-game appearance of the characters. It was a bit of a challenge, but I'm really happy with the end result. I have to admit that I'm not sure what I'll do with them, but just having them around is great fun. 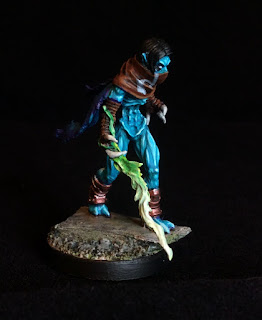 Conclusion:
They really are a great company. The quality is excellent, and I'm absolutely loving being able to finally own some iconic video game characters in miniature form. I'm sure that everyone who plays games has occasionally thought that they'd like a miniature of a character from one, well Klukva might just give you the chance!

The price of both miniatures and postage are both pretty reasonable, and certainly no more expensive than their competitors. The only possible downside to Klukva is that as they're based in Russia there can be some fairly lengthy postal delays in shipping. That said, for fun purchases like these that most people are going to buy just to paint and display, I don't feel that it should put anyone off.

Personally, I'm going to be on the lookout for more characters from Klukva; especially if they make anything else from Legacy of Kain (hint, hint... Vorador, hint, hint...), although I might find it hard to resist a little resin Cloud Strife...

If you fancy picking up your own Kain and Raziel, the website address for Klukva Miniatures is:  http://klukvaminiatures.com/goods