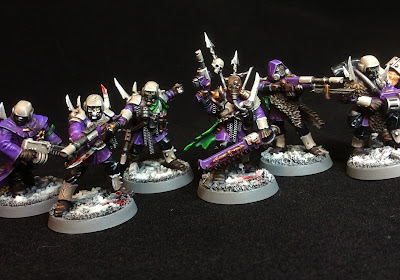 When Blackstone Fortress came out, I was immediately taken by some of the new chaos models, but I didn't want to fork out for a whole set. I also wanted to be able to integrate the minis into my force right away without having to use the odd little data sheets that were made for them for 40k.

With that in mind, I picked up a set of the Traitor Guard models on eBay and converted them for use as an ordinary cultist squad. I used a few standard plastic cultists to fill the gaps and also did a few head swaps here and there to get them all to match nicely.

I'm particularly fond of the head swap on their leader, which was pretty simple with some spare Mechanicus infiltrator bits. The models themselves had great detail, so I didn't want to change them too much.

I've painted them to match the rest of my Emperor's Children force, but I swapped the colours around and gave them white/bone colour armour and purple fatigues (as opposed to the usual Emperor's Children purple armour). They still match the force nicely, but it helps them look a little different, and it was quite fun to paint. I've actually built a second unit with hand to hand combat weapons, but I'm planning to paint them later, as finishing this unit was enough for the moment. 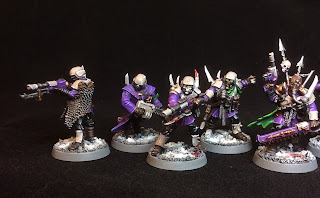