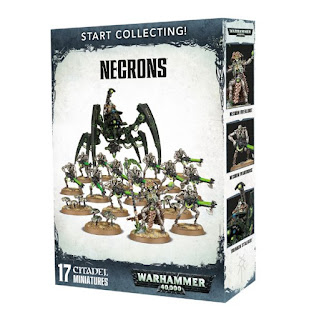 I have a cunning plan, one so deviously cunning I almost dare not speak it's name. Well, ok it involves painting little plastic men, so let's not get too excited.


You see in sunny old London town, well in the whole of England really the May bank holiday is almost upon us - meaning a long 3 day weekend and the perfect time to start yet another unnecessary and ultimately somewhat idiotic hobby project.


Anyway a week or 2 ago my brother Ed (who runs the notoriously capital letter obsessed blog BERSERKERBLADE) started on a new Mechanicus/Skitarii army. I wanted to start a new force at the same time, so we could run them as rival forces and gradually escalate the engagement. It also seemed perfect as his force had begun with one of the good value "Start Collecting" sets, and I could do the same, but I hadn't been able to settle on any one thing. Then it hit me like a War Scythe the back of the head - Necrons. The most amusing part is that both boxes come with very similar forces - a unit of troops, a silly walker and a leader. Once I realised that the dusty cogs in my brain started to turn and the hobby train was well underway.


There was one big reason why Necrons appealed - ease of panting. I don't want to give everything away yet, but I have an idea to make them look awesome in an unreasonably short period of time (yes it involves blasting them up with an airbrush). I'm also not going metallic, but bright freakin' orange. So stay tuned and get your sunglasses ready for that one.


I'm actually basing the scheme on this model that I painted for Infinity, but moving the steps around to simplify things. The plan is to be able to paint the whole set with minimum effort. I really do mean a minimum of effort too, but I'm gonna maximise the results. The plan is to be able to paint a whole unit in a day - if it weren't for having to build the things I'd try to aim for the whole box in one weekend!


The beauty of Necrons is that I can get away with a very limited colour palette and can use some of the principles of my own FPM method.


I also had another cunning plan that was one of the reasons I chose Necrons. As some readers will know I play an incredibly uncompetitive fluff based Chaos Space Marine force most of the time. It's a lot of fun, but it feels like hard work even to stay level with most armies on the field because Chaos just really do struggle to keep up. The Necrons should be fun to play as they're so resilient and about 10 times more powerful, meaning they should be nice and relaxing to play as a side project.

Anyway, with the plan in place we're ready to go. Stay tuned for part 2 where I'll be variously building and painting. With any luck I'll get in some games soon too. Let the fratricidal robot wars begin!

Also this, because I can't hear the word Necron without thinking Monolith.